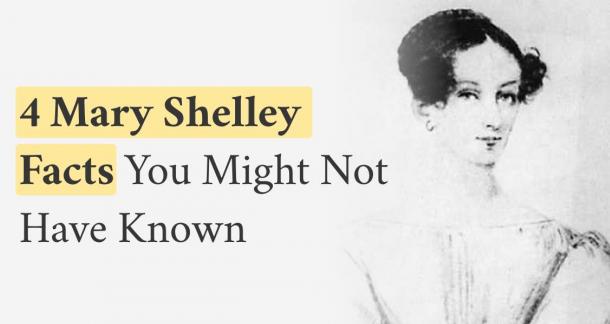 This month sees the arrival of a new biopic about Mary Shelley, the author of Frankenstein and wife to one of Britain’s most celebrated poets. To mark its release, we’re looking at some of our favorite facts surrounding the life and work of this groundbreaking writer.

1. Her mother was one of the first great feminist writers

Mary Wollstonecraft was a political thinker and the author of A Vindication of the Rights of Woman. This treatise, published in 1792, is thought to be one of the earliest examples of feminist philosophy: it argued, quite controversially at the time, that women were not naturally inferior to men — but made so by unequal access to education.

Wollstonecraft died in London in 1797, days after giving birth to her second child — who would eventually become known as Mary Wollstonecraft Shelley.

2. And everywhere that Mary went, death would surely follow

If there was one figure that loomed heavily over Shelley’s life and career, it was not that of her father or husband — but of the grim reaper.

At the age of 17, Mary began an affair with Percy Shelley, an acquaintance of her father with an estranged wife. Escaping to France against the wishes of her family, she quickly became pregnant with Shelley’s child. It did, however, end in tragedy as she gave birth two months premature. The infant, Clara, did not survive 12 days.

In the ensuing years, death would return to haunt her. In 1816, Percy Shelley’s first wife drowned herself, allowing the poet to remarry. Mary and Percy’s next two children, William and Clara Eveline, died of illness within a year of each other.

The Shelleys’ fourth and final child, Percy Florence, lived to be an old man. Sadly, the same could not be said of his father, the famed poet, who drowned in 1822 less than a month before his thirtieth birthday.

3. She wrote a novel that sounds a lot like "The Walking Dead"

Mary Shelley was by no means an obscure author. She was known in her life (and after) as the author of Frankenstein and wife of one of the great Romantics. Her other written works, however, were mostly overlooked until the 1960s.

A few years after the release and success of Frankenstein, Mary Shelley published a novel called The Last Man which is set in a post-apocalyptic future. It looks at the power struggles that play out when society crumbles: how some turn to religious fanaticism, and others to anarchy.

In a lot of ways, it's a precursor to popular survivalist films and TV shows like I Am Legend, and The Walking Dead, which itself is fascinated with similar themes surrounding erosion of society (only with zombies instead of a plague).

4. There have been over 50 feature films based on "Frankenstein"

Only Sherlock Holmes and Count Dracula have seen more time on the silver screen. And while, yes, most people still conflate the doctor with the creature he created, there has been no shortage of Frankenstein movies in over 100 years. Some of the more “interesting” Frankenstein movies include:

Will the film Mary Shelley be as popular as its namesake? Only time will tell. For now, share some of your favorite Shelley tidbits in the comments.

Just a heads up, you have Percy Shelley's death year as 1922.

This is a great article. I am looking forward to the film. Her life was fascinating. I don't know how true it is, but I read that she had sex with Shelley in the graveyard where her mother was buried. That's pretty damn creepy (if true).

Community Manager
helpfulsnowman from Colorado is reading But What If We're Wrong? by Chuck Klosterman May 25, 2018 - 9:41pm