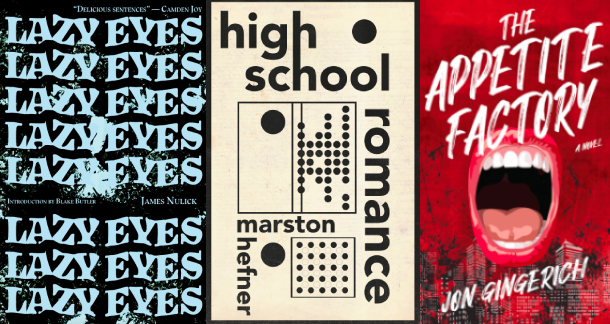 One reason why I’m drawn to reading my contemporaries is to deduce a sub-narrative of the collective unconscious; to see if a common needle of style, content, and intention has been thread through the zeitgeist. A “trend” that can only thrive unbeknownst in the rearview mirror rather than one based on present algorithm to pander towards what might sell. I see this as the one sincere way art can define an era, unencumbered by opportunists who come later, walking over the backs of those who have risked their raw instincts on the front lines.

I saw 2022 as the Year of The Intrusive Thought. While it all peaked in 2020-21: the mass-death trauma and paranoia of the pandemic, the insidious theater on both sides of our political spectrum, and the social insecurity we’ve found ourselves surrounded by, we have yet to liberate ourselves from those years. Looking back, there were upheavals and spikes, but no tangible revolution. We’ve simply “learned” to live with it all.

Our minds continue to react to the mayhem—bursts of insanity as a sane reaction to our fractured world— these doomed, perverse, and panicked introspections still roil inside us. Thoughts that attempt to make sense of it, rebel against it, or simply reflect its absurdity. Some faded away into the spiral of Q-Anon; others scrawled exceptional perfect-bound signposts that didn’t so much give us direction as told us where we might be.

True, anyone could write every incongruent fatalist/nihilist thought that breaches their mind and try calling it a book, but only a few can indicate which ones have the structural integrity to stack high enough where it might lead somewhere half-divine. 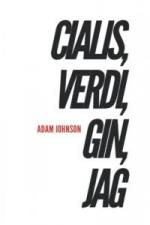 For some, Adam Johnson’s debut may be an endurance piece—I recall hearing at least one reader publicly stated she tapped out—but to be trapped inside the head of a materialistic narcissist obsessed with his son’s fiancé was a hell of an intimate ride. Unfiltered and unabashed, Goddard not only entertains every intrusive thought but succumbs to them at such an accelerated pace, there’s barely a split second for him to relish in his conquests; only a ramping up of his debasement every time you think it can’t go any further. As a narrator, Goddard isn’t just unreliable; he’s so unreal he nearly becomes a vapor, a spirit that possesses the reader in a secret handshake of mutual madness. I interviewed Adam Johnson about the book here last August.

Maine describes his debut as a “story collection that becomes sentient” —it morphs into a novel if you’re able to focus through his wide lens, where the pixels connect through a cascade of jabbing consciousness seeking recognizance. Part contemporary Southern Gothic, part punkhouse refugee graffiti, and part microscopic dissection of poetry hidden in our panorama, Characters main thread is Maine’s transformation from heavy reader to heavy writer, including every insecure, insightful, naïve, and brave thought he has during the meta-crossover. With every overlapping voice competing for volume, Maine invites you into the discordant conversation since you, the reader, are the reason they’ve gathered so fiercely. Edited with absolute care and precision for what is vital, Characters is a challenging and exhilarating read, only surpassed by Maine’s intense spoken word performances of these pieces.

Get Characters directly from Expat Press 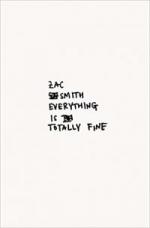 "Everything Is Totally Fine" by Zac Smith (Muumuu House)

In the first five minutes of reading EITF, I was mad about it, like legitimately upset, wondering why someone would release a collection of absolute absurdity that should have not only stayed in the authors mind, but deleted up there before it could be entertained in any way, shape, or form. Obama fan-fiction, what? Then, like a dam breaking, I started cracking up—howling, in fact—at the audacity of the effort, which gave me pause to re-evaluate Zac Smith’s whole deal; I ended up tripping over the whipsmart details of this writhing, slobbering collection. This book broke a really bad bout of depression in me, where I was entertaining the most doomed—and yes, ridiculous—thoughts in my own head; bad ideas that had been paralyzing me all winter. Now I dread to think what my year might have been like if Tao Lin hadn’t sent me this out of the blue. I couldn’t help but interview Zac for Lit Reactor that same month here.

Get Everything Is Totally Fine at Amazon 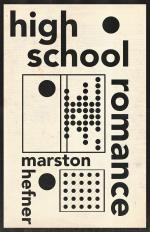 But these are just thoughts. We are not our thoughts and we are not our feelings. Unclear what we are but I’m sure it’s very good. We are not our thoughts. We are vaginas writes Hefner in his hilarious and heartbreaking collection; a debut that’s deceptively challenging, like a complex juvenile delinquent who’s created his own secret language. There’s almost a sense of elevated autism in Hefner’s use of repetition and clipped sentence structure, where we're pummeled by the simplicity before the lines warrant consecutive revisits to unravel their weight.

And I’ll never forget when I booked him at a reading this last April, which also happened to be my first time meeting my girlfriend’s nice mother, a wife of a dog-trainer, who’s comfort-level (and impression of me, the host) I became overwhelmingly concerned for as I psychically white-knuckled Marston’s recital: "I fucked my most prestigious dog in the world today. Fucking my best dog in the world felt so good. No one could hold a candle to my dog when we fucked.” Thanks, Marston. 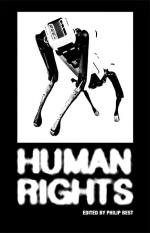 Sean Jesse Christmas (SJXSJC) writes like no other, with style and skill that almost entirely relies on the inherent terror of unwanted word associations stitched together by the dreaded ellipsis. Like fractured transmissions through blown receivers, it’s not necessarily what is being said as much as what it’s doing to you subliminally; your own poison wellsprings are churned by cipher and before you know it, you’re ushering a paranoid sub narrative to what you’re reading. I can’t begin to attempt to explain what "Orch Hit Two is" “about,” but I’m perceiving it a lost chapter to Christmas's 2021 novel, The Sex Shops of Sherman Oaks, given the re-appearance of Madhab, who seems to be a personified black hole, an apocalyptic magnet taunting whoever is dictating the text.

While this whole sci-fi anthology is contagious with variants of intrusive thought, I couldn’t get "A-Z of Robomasochism" by Audrey Szasz out of my head. Constructed of apocryphal news headlines, the clippings report on a self-fulfilling techno-nightmare turned inside out, where humans have begun abusing the robots assumed to be taking us over. Szasz enters and interprets the minds of these victims of mere circumstance, of progress, who have become sentient enough to cry for help, yet are trapped in their consciousness, therefore rendered silent.

I wrote more about the anthology here. 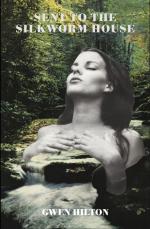 "Sent to The Silkworm House" by Gwen Hilton (Expat Press)

Memory is like a VCR tape. Every time you remember, the tape warps and distorts. Hilton’s unforgettable debut is a tightly wound accumulated confessional of kink and cuck, propelled by a hardboiled sheen that deceives any anticipated trope, yet still feels familiar the more suffocated you are in the narrator’s magnetic mind, un-spared by every insightful anxiety. Much like chess, they’re not just stuck in their own head but possess every opposing consciousness as well in order to deduce their next move. Part detective novel, part low-level worker diary and another part irresistible smut, timing is everything here; especially considering the book’s lust for John Hinkley Jr., who happened to rise again while Hilton wrote the novel, as if they conjured his second coming.

Get Sent to the Silkworm House directly from Expat Press 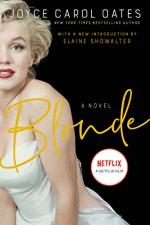 I’m aware this book is over twenty years old, but I read it this year in anticipation of Andrew Dominik’s film adaptation (which I’m convinced was the cinematic event of 2022, especially considering the film sparked its own polarizing culture war last September), therefore the book feels new again. It makes an exceptional appearance in this list due to Oates completely possessing the mind of Monroe, almost as if the author herself is the intrusive thought. What makes Oates’s Monroe so unique in this angle: it’s her compulsive positive attitude, her inner dialogue of blind faith and romantic idealism that threatens her throughout the story, leaving her vulnerable to those drunk on power and libido. It seems so contemporary; the way our modern world has transgressed the whole cycle, when sincerity often reads as suspect to the insincere, then aims to destroy that candor. It’s enough to trigger psychosis in anyone. I wrote more about it here.

Get Blonde at Bookshop or Amazon 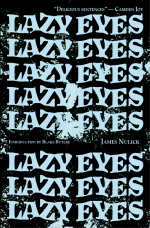 As the third Expat title on this listicle, it suggests they may have the market cornered with this vibe, and Nulick’s peculiar vantage further sharpens and smooths that outspoken inner space. Supported by Blake Butler’s mind-bending introduction, The Source of the Leak is The Leak Itself, Nulick’s overlapping, kaleidoscopic voices are far too mercurial to attribute to any one source. Instead, these delicate sentences are conduits for spirits of abused children and animals haunting the collective consciousness, and Nulick has polished this psychic terror into a detached sublime cognizance. I wrote more about it here. 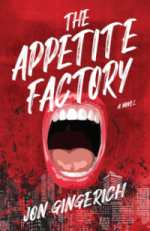 "The Appetite Factory" by Jon Gingerich

Gingerich’s ambitious debut might be the only entry on here with a linear narrative; an immaculately constructed transgressive thriller (fans of Palahniuk will rejoice) where the character’s intrusive thoughts provide its scaffolding. Sure, we’ve all thought about what detergent or other cleaning products might taste like since they smell so fresh and floral, but Lundell takes these compulsive thoughts into action (and eventually, addiction), indulging in these toxic wonders, discovering ambrosia in their forbidden natures. As an embattled New York City PR agent, Lundell must think outside of the box for his agency’s success while keeping his unorthodox “nourishment” private. When he is blackmailed by a secretary, there are countless secret lives beyond Lundell trying to hide from the mounting fallout, until he must learn to embrace his peculiarities to overhaul a professional reinvention. I wrote more about the book here.

This list was no contest, but for those keeping track, The Appetite Factory was my favorite book of the year.