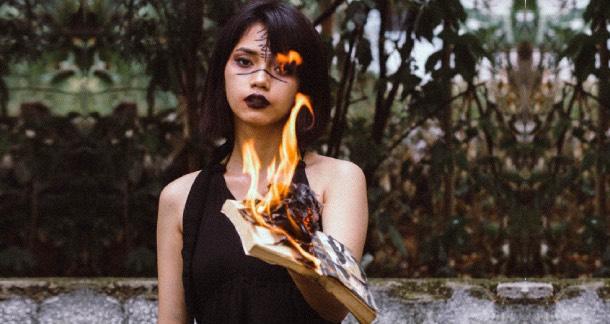 As our way of saying happy Halloween to you, dear reader, we’re gifting you with twenty stories to read or listen to this Halloween, all of which are available for free online. The majority of these stories have a connection to Halloween (some tenuous), though a few are just damn good stories to get you in the Halloween spirit. Let's get to it.

Hadley, a young widow, is startled by Anton Kruppev one evening when he decides to ‘drop by’ unannounced. For those familiar with Joyce Carol Oates’s work (especially "Where Are You Going, Where Have You Been?") this should be enough to raise concern, but if not there’s always the misshapen pumpkin for a head he’s wearing. As with a number of Oates’s stories, the relationship between protagonist Hadley and her visitor, Kruppev, is a complicated one, steeped in history, attraction, and awkwardness.

Those fine folks at Hawk & Cleaver have gone from strength-to-strength in the past year, most notably with their flagship offering, The Other Stories, and Josh Curran’s audio-anthology, Miscreation. When I heard the team at H&C were pulling something together for Halloween, expectations were high and I haven’t been disappointed. "The Nest" is a five-act story written by Ben Errington, Daniel Willcocks, Andy Conduit-Turner, and John Crinan. The premise is simple: four single parents disappear leading to an investigation by the children they left behind. There’s something a little Stranger Things about what is undoubtedly one of Hawk & Cleaver’s strongest productions yet.

Listen to "The Nest" Act One

Originally published in October Dreams II: A Celebration of Halloween, edited by Richard Chizmar and Robert Morrish, and reprinted in Nightmare Magazine, Stephen Graham Jones’s "Universal Horror" begins—like many good Halloween parties—with a trick or treat drinking game. The clue as to what the story is about is in the title really, as it juxtaposes Universal horror movies with real-life horror. Stephen Graham Jones stories are often mandatory reading and "Universal Horror" is no different. So stop reading this and start reading that.

4. "Too Many Ghosts" by Steve Rasnic Tem

Speaking of stalwarts of the genre, few can compare to Steve Rasnic Tem. In "Too Many Ghosts", published in The Dark Magazine, a man keeps seeing the faces of dead relatives and friends in wood carvings. Check out this wonderful line:

“The face in the wood looked disturbingly familiar—the invisible eyes, and the way the hair flowed with the grain—but he could not connect the visage with a name.”

Read "Too Many Ghosts" by Steve Rasnic Tem

5. "The Dualitists" by Bram Stoker

Mixing the old with the new, few classic authors evoke horror like Bram Stoker. "The Dualitists; or, the Death Doom of the Double Born" was first published in November 1886 in the 1887 issue of The Theatre Annual: Containing Stories, Reminiscences and Verses, Carson & Comerford, London, edited by Clement Scott. Shortly after a couple have identical twins, two local kids start trashing things in the local area, soon they get bored of wrecking inanimate objects. Can you guess what happens next?

Read "The Dualitists" by Bram Stoker

6. "The Devil Came to Mamie’s on Hallowe’en" by Lisa Morton

Originally published in Cemetery Dance Magazine #60, "The Devil Came to Mamie’s on Hallowe’en" by Lisa Morton is available to read or listen to on PseudoPod. The opening line goes like this: “It was Hallowe’en night, and business was slow at the whorehouse.” Now, tell me you don’t want to read the rest? Exactly.

7. "Trick or Treat" by Violent Harvest

For those familiar with Jon Grilz’s previous podcast, Small Town Horror, his latest offering, Creepy Pod, will be right up your street. "Trick or Treat" is part of October’s ‘31 Days of Horror’ and is about as Halloween as stories get. Lost manuscript? Tick. Hidden town? Tick. Ancient beings? Tick. Primordial worship? Tick. Missing children? Tick.

Listen to "Trick or Treat" by Violent Harvest

Probably the shortest story on this list, but by no means the least traumatic, "Incarnations of Burned Children" by David Foster Wallace was published in Esquire on 21 April, 2009. Definitely proceed with caution if you’re a parent with a young kid.

Listen to "Incarnations of Burned Children" by David Foster Wallace

"The Black Cat’"by Edgar Allan Poe is one of the most anthologised Halloween tales, which is why we’re continuing the trend here. Surely we don’t need to tell you anything more about Poe or the titular cat?

The entire NoSleep Podcast Halloween special is excellent with wonderful interludes between the stories, too, but a particular favourite was "Pork n Stuff." Listen in and see if you fancy what’s on the menu …

And seeing as I’m in the giving mood, here are ten more treats for you (including all of those awesome NoSleep Podcast stories I mentioned above).

12. "You Know How the Story Goes" by Thomas Olde Heuvelt (text)

15. "Halloween in the Suburbs" by Manen Lyset (audio)

19. "The Halloween Children of Old Harrington" by D. Williams (audio)

Happy Halloween, friends. Let us know your favourite Halloween reads in the comments.