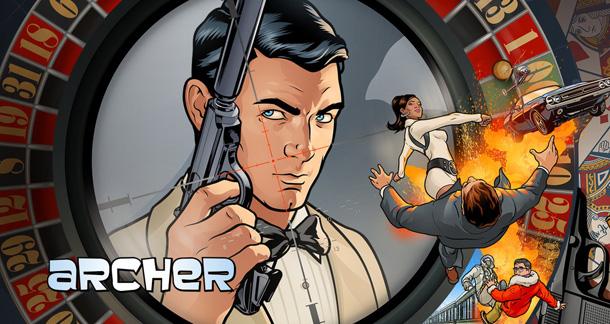 If I were having a dinner party, and I could invite anyone I wanted, I would totally invite Adam Reed, the creator and writer of the made-for-adults cartoon show, Archer.

While I fed Adam a feast of hot dogs with mac & cheese (‘cause that’s what we call dinner in the Houston house), I’d ask him how he comes up with the many, many literary-minded lines he write for his characters.

The show is funny, sexy, and violent, of course, but, I am most turned on by the—youguessedit, grammar! Adam Reed is a Word Nerd’s wet dream. (*Sploosh.) Line after line after line of witty repartee around words, grammar, syntax, parts of speech, literary devices, allusions, vocabulary, metaphors…hold on…[fanning self]...Okay, I’m back. There is so much writing and grammar content jammed into the script that watching a season of Archer should count for college credit. Watch all 7 seasons, and you should earn a Major.

For your pleasure (and mine), I’ve collected 12 Grammar and Writing Tips from the scripts of Archer. Enjoy.

Riley: "Archer! What a coincidence, I was just talkin' about ya."
Archer: "Yeah, with who? Because that buck-toothed little shit doesn't even speak English!"
Bucky: "I do little bit."
Archer: "No, you don't."
Bucky: "And correct syntax is 'with whom.'"

This is like O. Henry and Alanis Morissette had a baby, and named it this exact situation!

Lana: What the hell are you doing?
Archer: I’m Archerizing this plan!
Lana: What? No, no, uh-uh, you cannot make yourself a verb. I will not allow it.
Archer: I’m a verb now, Lana, deal with it. And then also cover me, please.

Archer: I’m not saying I invented the turtleneck, but I was the first person to realize its potential as a tactical garment. The tactical turtleneck! The… tactleneck.

Slater: So I saw you coming on to Archer. I was just gonna tell you he’s had the clap so many times, it’s more like applause.

Malory: Kick it right through the basket for a home run.

Archer: Can you close your eyes? It feels like I'm banging tail-lights on a country road.

[Pam and Cheryl are looking at pictures of Burt Reynolds online]

Pam: I swear to god, you could drown a toddler in my panties right now! … Not that you would. 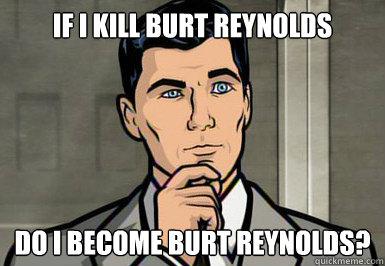 Lana: "I just traveled eight thousand miles and got shanghaied by Malaysian pirates trying to rescue a person who is now responsible for my getting crabs twice!
Archer: "Oh, come on! These crabs, this time, were not my fault. This whole dungeon is, um...."
Ray: "Were you gonna say 'lousy with them?'"
Archer: "I was, but then I realized that's, uh..."
Riley: "Where that phrase comes from? Yeah."

Noah: Can I just run up to my hovel real quick and get the only extant copy of my dissertation?
Archer: Noah, I've still got four bullets.
Noah: Oh God! Do you know what 'extant' means?!
Archer: Do you know what 'License to kill' means?
Noah:… I'll write another one.
Archer: The world holds its breath.

Randy: Do you want to have sex with my wife?
Archer: No! I... I swear, this was just an extremely unlikely mishap with the barbed wire.
Randy: Because we would be amenable to that. Well? Why do you look so nonplussed?
Archer: Because I wasn't sure if you knew what "amenable" actually meant, until you followed it up with "nonplussed."

9. The many uses of Literally

Malory: I am literally going to kill him.
Ray: Well, figurative —
Malory: Literally! I’ll lure him to my condo in Miami, drug his steak au poivre, drive him out to the Everglades, slather him with rancid chicken fat, and then toss him to the gators!
Ray: Pretty specific for a hypothetical…
Malory: Oh, he is going to pay for this. Literally. 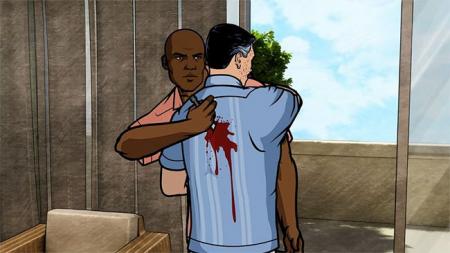 Archer: He literally stabbed me in the back!
Slater: Because you jeopardized his mission.
Lana: What mission? To sell classified military technology to the Chinese?
Slater: Phony technology we wanted China to have. They've been chasing their tails on the whisper drive for years.
Lana: Oh.
Archer: "Oh"?
Malory: I knew it. In my heart of hearts, I knew he was one of good guys.
Archer: Literally! The back! Stabbed it!
Slater: Well, but then you people ripped off his hands, so...
Archer: After he literally stabbed me! In the back!
Malory: Oh, give it a rest, Sterling. I'm sure you did something to deserve it.
Archer: What-?
Malory: But now you have a chance to right that wrong, which is a rare thing.
Slater: About as rare as getting called up to the majors from single-A ball, which is...
Lana: Hey!
Malory: Lana! I'm sure that was a sports analogy meant to be cutting, but we will take the mission, won't we, Sterling?
Archer: Huh? Yeah. Oh, sorry. I- It's just, I-I'm worried my entire life I've been misusing the word "literally"!
[intercom beeps]
Cheryl: [distorted] And certainly over using.

Malory: What is this? Christmas? And is Krieger... Hard at work?
Archer: He literally might be, yes.
Lana: Ew.

Archer: I've always wanted to fight on top of a moving train.
Bilko: Well, if I know my boys, you might get your chance, big guy.
Archer: Thanks, Freddy Foreshadowing.

Malory: It was a NATO stay-behind set up to counter a possible Soviet invasion of Western Europe.
Lana: But then it sort of turned into this whole weird crypto-fascist CIA shitshow, starring Allen Dulles and a bunch of former Nazis.
Malory: Thanks, Holly Hindsight.

Cyril: I'm not sure that's technically irony.
Archer: This is like O. Henry and Alanis Morissette had a baby, and named it this exact situation!

Malory: Sterling, no! You're not well. What are you going to do?
Archer: Cry havoc and let slip the hogs of war!
Lana: Dogs of war...
Archer: Whatever farm animal of war, Lana! Shut up! 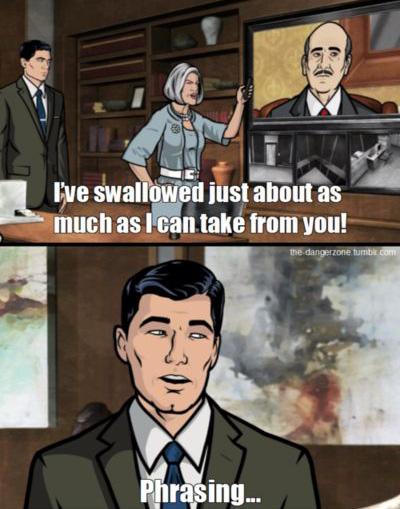 Lana: Are you coming?
Archer: No, but I’m breathing fast.

Malory: (arguing over the phone) You wanna play me hard?
Archer: Phrasing.
Malory: Well, then, you better nut up!
Archer: Phrasing!
Malory: Because I've swallowed just about all I'm going to take from you!
Archer: Hey! Phrasing!

Cheryl: Goddamn it! Who the hell drilled my box?!
Archer: So, we’re just done with phrasing, right? That’s not a thing anymore?

May I add connotation and nuance:

Archer: "Oh my god! You killed a hooker!"

Archer: "No, Cyrill! When they're dead, they're just hookers!"

Yes, Josh! That, too. I could have made this article really long--there are so many awesome examples--but I had to stop somewhere!

"Do you even know what an idiom is?"
"Colloquial metaphor?"

Skorpio: Not as much as I love chocolate. So you, Malaka, bring plenty of it, yes?

Archer: I would prefer not to?

Archer: Bartleby the Scrivener? Anybody? Not a big Melville crowd here, huh? Ah, yeah, it's not an easy read.

Damn, so many from just that episode. Plus, a new one!

Pam: Oh my God, yes! We should call her! Because I would literally murder somebody for some migas right now.

Krieger:Every single noun and verb in that sentence totally arouses me.

Really expecting to see this exchange here, my favourite esoteric literary reference from the show.

I love that there was literally a "Chekhov gun", AND that there was a Chekhov's Gun foreshadowing, but it wasn't the gun. The needle fit the bill though. :)

^how'd i forget about that one?

Dwayne from Cincinnati, Ohio (suburbs) is reading books that rotate to often to keep this updated July 22, 2016 - 3:52pm

Make this a column!

Dwayne! That would be awesome. I'd love doing the research for that. :)

Dwayne from Cincinnati, Ohio (suburbs) is reading books that rotate to often to keep this updated July 25, 2016 - 1:25pm

I think it could work. You could expand each of these out and have your first year's material right there. Work in a month on world building (Archer seems to be an alternative history right) if that is your thing.

Unbelievable! Cool job, Taylor! I really liked it. Such an excellent example of creating a nice mixture of TV show and the great script. Who knew that grammar and writing tricks could be a perfect adding to adventures of the agent.