11 Tips To Keep You Writing While Traveling 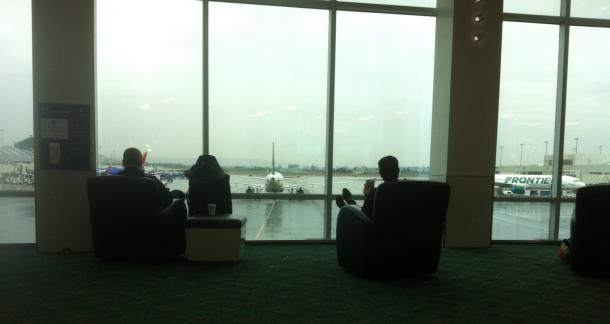 Getting into a workshop with Chuck Palahniuk and Lidia Yuknavitch was one of the best pieces of news I’d ever received. Especially because when I got it, my cat had died, I had stitches in my mouth, and I was on prescription meds that meant I couldn’t drink a drop at the heavy-drinking party I organize every year. That night, when I got home from said party dead sober, mouth throbbing, I got the email: “You’re in.”

To make all 12 sessions, I had to travel from northern Colorado to Oregon, every Monday. The way this shook out, I took 22 flights in 3 months.

I’m very lucky that I was able to do that. My work flexed around my schedule quite a bit. And while it wasn’t cheap, I compared it to a college class. About the same length, hopefully of greater value, and honestly, cheaper.

22 flights is a lot of flights. I’m seeing that numbers don’t really express what that means. But I’m not here to lament how much travel it was. I’m here to tell you what kept me writing while traveling. And to give you some tips should you ever find yourself traveling a lot, a little, or somewhere in between.

If you travel a lot, you know it sucks. But nobody wants to hear you complain about it.

Everyone thinks of traveling as this glamorous thing. You’re in an airport bar, wearing a suit, sipping on a cocktail at 8:45 AM. You’ll probably meet a beautiful woman and have a 45-minute romance.

You and I know it’s not like that. Travel is coming heartstoppingly close to massacring an antelope in your car while driving the back road to the airport on a few hours of sleep. It’s using a urinal next to a dude who’s flossing. The closest thing you have to a romance with a beautiful stranger is sitting next to a burly dude whose arm is way over the armrest, and tattooed on that arm is a fully nude woman with her lady parts spread wide open.

People don’t know that traveling sucks. And they don’t want to hear that it sucks. So don’t bother. Take my word for it.

If you kept your eyes on the news in February, they made it sound like airplanes were basically horizontal test tubes brimming with flu.

If you want to keep working while you travel, no matter what the circumstances, you’re better off with paper and pen. I know, most of us can type almost as fast as we think.

But let’s talk about the time losses with a laptop. You’ve got your boot up and shutdown. You’ve got the time you spend hopping on different WiFi networks in the airport, on the plane, when you get where you’re going, and so on. On takeoff and landing they’ll have you stow your laptop. And to be honest, having the whole world a click away isn’t a good thing when you’re writing.

It’s just not as convenient to bust out a computer when you’ve got a spare 5 minutes here and there. It’s not super practical if you’re on a bus. Your notebook never runs out of power. It’s never out of WiFi range, and you never turn the page and see someone’s already written in “$10 bucks to connect to the page, bro.”

Learn to love the soreness you get from writing by hand. Learn to use the unpredictable little moments that come with travel because sometimes they’re the only moments you’ll have.

My rule with technology is ABC: Always Be Chargin’. Maybe you’ll only use 15% of your battery while you wait in the terminal for a flight to board. Plug in anyway. You might want that 15% later. That 15% might carry you to your next charge.

Get a wall adapter that turns one wall outlet into a few outlets plus a few USB outlets. It’s a great way to spend $15 bucks. Outlets are in demand in a lot of places, but most fellow travelers won’t turn you down if you ask to plug in an adapter so you can share the outlet. Same goes for coffee shops, libraries, other places you might end up.

Part of the goal of writing while you travel is to kill time, and breaking up the methods that provide you the most efficiency can be a great way to kill more of that time, and it might give you a new perspective or a new way to solve a problem in your work.

If you kept your eyes on the news in February, they made it sound like airplanes were basically horizontal test tubes brimming with flu.

I’m not saying you’ve got to Purell every time you take a breath. I’m saying that it’s good to prompt yourself to wash your hands a little more often and to do it a little more thoroughly.

What You Can, When You Can

A good rule when you travel is to do what you can when you can. On the flight, I can write, but I can’t walk. So walk in the airport, write on the plane.

Traveling will not turn you into a writing machine. If you’re used to putting in a couple hours in a day, don’t board the plane with the idea of going for a 7-hour session.

It’s cool to watch a movie sometimes. It’s cool, on a 5-hour flight, to spend a couple hours working and a couple hours relaxing. Just be smart about it. Work first, then relax. Earn that viewing of Baby Driver on a sweet 5-inch screen by putting in a solid work chunk first.

If You’re Not Alone

Maybe you’re going on vacation with your lovely partner or a friend or a family member. Repeat after me: “If I can work on the plane, I’ll be more present with you and can enjoy our vacation together undistracted.”

I’ll share one little bit I learned in the workshop.

Chuck has talked about head authority lots over the years. This is a term for information a character can spout off so that the reader trusts them, in a way. Trusts that this character knows what he’s talking about.

With the rise of the internet, head authority is difficult to come by. You have to get into a specific topic pretty deep in order to really get head authority going.

Airplanes are a great place to do this. Strike up a conversation with a seatmate. You’ve got two. You’re going to be staring at their tattoos of naked, oddly-posed women. You’re already pretty damn intimate.

A good way to start this conversation, tell them something a little humiliating. My go-to, I flew Frontier, and they turned me down for their credit card, which they pitch to the entire plane at some point during the flight. I’d say, “Every flight they pitch this thing, but they turned me down. And now I have to listen to the commercial every time.” It’s just a little detail that I’m...kind of a fuck-up. It makes people think that they’ve got nothing to lose by sharing with me. And the natural, human reaction is to hit me back with an even better story.

Give It The Finishing Touch When You’re Not In Motion

Writing on a plane or a bus or a train or whatever is, at best, like writing with a TV on in the background. There’s just a little bit of distraction no matter what you do.

Be A Kind Traveler

I think the most draining part of travel is that you see the worst of a lot of folks. People are not at their most courteous when they travel. To put it lightly. I’d like to tell you that being a kind person when you travel will get you upgraded, net you rewards, or some shit like that. But it won’t.

The point is, if everyone tried to be courteous, it’d be a lot easier.

That’s a pipe dream, but that doesn’t mean you should act like a jerk.

Pay attention. When you’re in line, pay attention to what’s going on, when it’s your turn, and what you’re supposed to be doing.

Take a shower, skip the perfume/cologne.

Try to not yell at people who have no control over what’s happening to you.

Get there early enough that small delays don’t cause a panic. Whatever that means for you, time-wise, do it.

And just remember, you’ve got a big advantage. No matter how bad it gets, it’s always material for later.

6 Ways to Fall in Love with Writing
Technology: Help Or Hindrance To Writers?