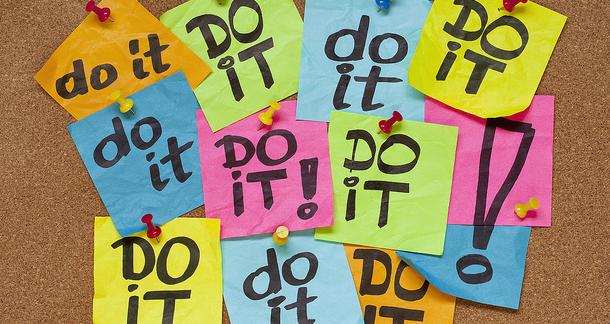 The concept of fast-drafting is amazing for a lot of reasons, but the main one is it forces your hand as far as starting, especially if you go on schedule with NaNoWriMo. But how do you keep up that pace when there are so many distractions to tempt you away? Here are some tips for resisting the urge to procrastinate, because falling behind in NaNo is the kiss of death. Good news: these tips apply to writing outside of NaNo and even non-writing, so once you've got them under your belt the applications are endless.

1. Forgive Yourself Your Failures

This isn’t warm fuzzy BS; it’s science. Beating ourselves up over times we’ve procrastinated in the past (or so far, depending on where you are right now) only makes us more likely to keep doing it. Want to move on? No more self-flagellation for how much you suck. Let that shit go and give it a fresh start. (Repeat as needed.)

Give yourself some time to root around and figure out what’s really going on.

Often times we procrastinate because there’s something overwhelming or otherwise problematic that we’re afraid of. And, naturally, we like to avoid those things. But avoiding them only prolongs the procrastination period. So give yourself some time to root around and figure out what’s really going on. Are you scared that your draft might suck? Are you too worried about outside pressures? Are you dreading the pain of writing a specific scene? Once you figure out what’s wrong, you can address it and move on, rather than letting it lurk in the background and hold you back. (PS- if you're procrastinating because you're stuck, here are 15 methods to brainstorm your way out of problems.)

Starting is always the hard part, whether it’s for a new book or even just for today’s drafting time. The hardest part is getting going. So don’t cater to it; don’t let yourself dither. Charge the start like a freaking greyhound. You can pause and think and stall later, if needed. But not now. Now you sit your ass down and break the seal. Do it.

AKA an “accountability buddy.” Someone to bug you about how you’re doing and if you’re sticking to the plan. Do the same for them. Don’t pick someone afraid of following up. And try to pick someone likely to stick to the plan; you're also setting examples for each other.

If it works for toddlers, it’ll work for you. Want to watch a thirty minute TV show? Not until you’ve hit today’s word count. Want to eat a cookie? Not until you get 500 words on the screen. Whether it’s food, fun, relaxation, or whatever, withholding until you’ve done the thing is a tried and true method of productivity.

6. Turn Off Your Damn Phone

Seriously. Not on vibrate, not silenced, not screen-down on the table over there. OFF. Away. Out of sight. In another room.

7. Cut Off Your WiFi

Again, OFF. You are capable. I believe in you.

Remember why you were excited about this book? You were, or you wouldn’t have committed to this rather crazy idea of drafting it in a month. Get back to that excitement. Geek out with someone who loves you enough to listen. Read your early notes. That passion is your guiding light; follow it to victory.

9. Give Yourself a Schedule

Don’t just say "1,667 words a day" and assume you’ll make it happen. Figure out when exactly you’ll make that time. Does it take you an hour? Two? Three? More? You have to schedule those chunks or the words aren’t going to happen. It’s as simple as that. Once you’ve scheduled drafting time, don’t let anything disrupt it but emergencies. Hold that sacred.

What’s your backup plan for days when the words don’t make it onto the page?

Plan A is for suckers. (Or that’s what we tell ourselves after it’s out of the question.) Let’s just say that you done screwed up. Whether it was a valid emergency/disruption or you just dropped the ball, what’s your backup plan for days when the words don’t make it onto the page? Will you write double tomorrow? Will you write a little bit more each day for the rest of the month? Will you lower your total wordcount goal by that many? Figure out what you can live with and what’s most likely to keep you on track, and stick to that. (And remember tip #1.)

And last but not least, when things go awry as they inevitably will, keep the big picture in mind. What’s your goal? Not the hard goal—50,000 words in a month—but the ultimate goal? Why are you doing NaNoWriMo (or whatever you’re doing)? Do you want to fast draft your novel so you have something to work with? Are you just trying to gain some experience? Are you wanting to get the bulk of a project out? Play? Explore an idea? Have fun? Crush it for a deadline? When things go wonky, revisit this goal to gain perspective. Once you have that, all of the smaller adjustments and decisions should become much easier to make.

Procrastinators, what’s your biggest downfall? On-target go-getters, what are your secrets to beating procrastination? Who all is doing NaNo this year? How’s it going so far?

3, 8, and 11 speak to my passionate but procrastinating soul. 11 especially has me thinking, because everytime I start NaNoWriMo, it's with a novel I don't feel entirely comfortable fast-drafting. I just keep thinking about all the work I'll end up making for myself later regarding structure, or that I didn't do enough research before beginning. But then, I have to remind myself that this month gets me to actually, physically fucking WRITE. And that's...the goal.

This article is great... speaks to me on so many levels.

Thanks for putting this website up, I will visit here often..... to keep me inspired to continue with my poetry writing.   I have had a long hiatus... but I am back with a vengeance!!

While waiting for the Miss France 2020 live contest, which will take place in Marseille next December, it is time for regional elections. This Saturday, September 21, it is Évelyne de Larichaudy who was elected Miss Ile-de-France 2019.