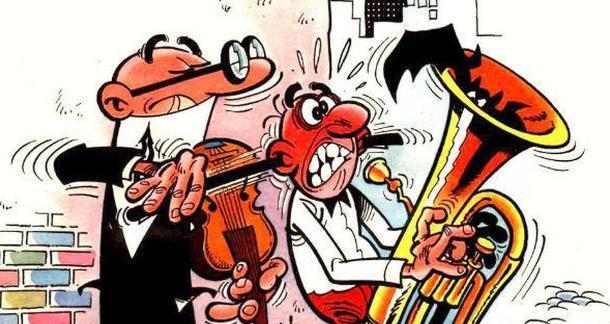 As a kid spending my summers in a dilapidated old house by the traintracks in a tiny town in Northern Spain, comic books were very important to me because they were the only non-running-around form of entertainment I had. I devoured comics, mostly by Spanish comic maestro Francisco Ibañez. Mortadelo y Filemón, El Botones Sacarino, and 13, Rue del Percebe were all favorites. I also dug Goomer, Pepe Gotera y Otilio, and Asterix (which was French but regularly found in Spanish). Packed with humor, violence, and a noir-esque/pulpy atmosphere, they undoubtedly played a role in shaping my young mind. However, I soon fell in love with books and abandoned comics forever. This meant that I never really became a fan of graphic novels. Sure, I have bought and read a few, but not many. A couple of months ago, I was thinking that by not reading graphic novels, I was missing a lot of great writing and some top-notch entertainment, so I decided to change that. For five consecutive weekends I devoured graphic novels, nonfiction, and memoirs. I read horror, pulp, political stuff, historical narratives, science fiction, true crime, and everything in between. I was reading about 10 graphic novels per weekend, and I was learning and re-learning some things that apply to all writing. Here are the top ten:

As novelists, we have all this empty space on the page and we just want to fill it with words. But in graphic novels, economy of language is what differentiates a fast-paced, entertaining narrative from a long, overwritten piece of garbage. When you have a tiny bubble or panel to fill and that's it, you select your words carefully, you think about the message you want to get across, and what is the most effective combination of words to achieve that. Reading graphic novels and paying attention to dialog, you soon realize that the dialog in graphic novels is closer to what you hear every day than those 3-page soliloquies that you often find in novels. In short, graphic novels teach you to keep it short.

Economy of language is what differentiates a fast-paced, entertaining narrative from a long, overwritten piece of garbage.

9. Quirky characters are easy to remember

When I'm reading a novel and the list of characters passes the dozen-character mark, I sometimes start getting lost. It's hard to give every character a backstory and something that makes them relevant to the narrative at hand. However, in a graphic novel, the ability to give characters something visual that makes them stand out makes it much easier to keep up. We can do this in novels, too. Don't give everyone a limp or a neck tattoo or an eyepatch, but make a few characters special. An affinity for hats. Very thick eyebrows. A scar. A tattoo on their arm. Something they do with their hands when nervous. All these things will probably stick with your reader much more than a name. Try it out.

8. We are visual animals

Sometimes I'm reading a novel and suddenly realize that two people have been talking for three chapters and I don't know what they look like. They are disembodied voices or faceless mannequins sitting at a coffee joint. Other times, I start wondering what the size of Steve's left testicle or the tiny mole on Sarah's neck have to do with anything. There is a perfect spot between not saying anything about your characters and telling us about each of their freckles, and graphic novels reminded me that having something to feed our visual nature is great. Mention the color of a shirt. Talk about some funky shoes. Describe the way someone's movements change because of what they're wearing. Tell us about hair color and angular faces and awful teeth. Show us things with your words.

This has to do with the previous entry somewhat. Sometimes you read dialog and then realize that you know nothing about what's going on. Are they having coffee? Are they walking around the city? Are they sitting on an ugly sofa in a dingy room for "casting"? I don't need to know the color of the napkins because I'm rarely in the mood for descriptions that belong in a classic Russian novel, but I want to know where the action is taking place, and you as a writer need to put me there...and you have to do it without me noticing. Graphic novels show you the background (and there are some absorbing backgrounds out there!), and we must do the same with words.

I'm currently reading three novels in the 400-600 page range. However, I don't read 100 of those every year. What I do read fast and often are novellas. I can devour 5 or 8 graphic novels in a day, and there is something strangely satisfying about that. That feeling of satisfaction may or may not send a reader to Amazon as soon as they're done with your book to buy another one. No, I'm not saying that amazing 350-page novel you wrote needs to be 120 pages; what I'm saying is that you need to keep in mind that our books are fighting against movies, every series on Netflix, porn, video games, Facebook, Twitter, free online magazines, staring out the window, Instagram...do I need to keep going? There are a lot of options, and sometimes a really thick book doesn't seem like a viable one, so write that massive beast, and then maybe turn out a novella, deal?

5. Body language is a thing

This is probably the trickiest one on this list. There is a very fine line between "Her fingers kept playing with the corner of her napkin," or "Her hand shook with anger, her finger dangerously testing the trigger," and "She looked angry. Her eyebrows were knotted in the middle of her forehead. Sweat ran down the sides of her neck. Her hands were shaking, her finger dangerously close to the trigger. She looked..." You get the point. Don't forget that someone saying "Fuck you" delivers a message, but that someone flipping the bird does exactly the same thing. In real life, we use our hands and face to communicate, and adding touches of that to your writing will surely enrich your work. When you do it, think about graphic novels and drop a short description or mention a single detail and move on.

Most fights/violent encounters are over quickly. Go pick a fight at your local bar and you'll see what I mean.

Sure, some fights last for half and hour. Sure, violence will always be happening if you're writing about a war or a novel about a boxer. However, most fights/violent encounters are over quickly. Go pick a fight at your local bar and you'll see what I mean. Oh, I've had some long fights (the one in which my right eyebrow was turned into a pair of lips against the edge of table comes to mind), but I've been in many more short ones. One good punch is all it takes. Please stop writing crime novels where most guys act like trained MMA fighters. Read some violent graphic novels and you'll see why Batman's classic "POW!" and "BAM!" are still usable today.

3. When guns come out, bodies drop

One thing I noticed while binge reading graphic novels is that there is much less posturing than in books and movies. Criminals don't wave their pieces around too much. Likewise, there's no continuous cocking of guns. Instead, when the cannons come out, there are explosions, there's blood, and bodies hit the floor with half their faces blown off. This is exactly the way it should be in fiction. If you have a thing for guns, that's great, but once describing guns and having your characters play with their guns gets in the way of your narrative, you're doing it wrong.

This is one where the graphic folks have the upper hand. They can go monochromatic and immediately set the atmosphere. It's also easy to create the perfect atmosphere for a noir if you can go black and white and set a guy with a busted nose on a stool in a crappy bar. As writers, we need to be aware of atmosphere at all times and then create it with a few words and descriptions. Every act, move, and line of dialogue is filtered/contextualized by atmosphere. For me, a great writer can make me feel fear in a well-lit room in the middle of the day or make two mobsters have a deadly conversation in the soup aisle at the grocery store. If you can nail atmosphere, the rest will flow a tad more easily.

How many times have you read that? Well, a lot of writing advice is crap, but this one is worth remembering. Graphic novels show. They show all the damn time from page one to the end. Authors need to do the same thing. Take exposition out back and shoot it between the eyes. Then you can come back and write. Maybe this is a confession, but I still struggle with this one. If I do research for a novel, I end up dropping that knowledge in there in passages that tell a lot and show nothing. I constantly edit myself because of it. Binging on graphic novels helped me see why showing is so effective, and it reminded me once again that some writing tricks are worth relearning once in a while.

What about you? Recommend some graphic novels in the comments, and tell us what they taught you as a writer.

Oh, Gabino. What a flashback to childhood is to remember Mortadelo y Filemon. I'm sure we also learnt something about creating characters and telling stories from Maestro Ibáñez. Greetings from Northern Spain

Recommendations for graphic novels please - and any graphic short shorts I can read online?