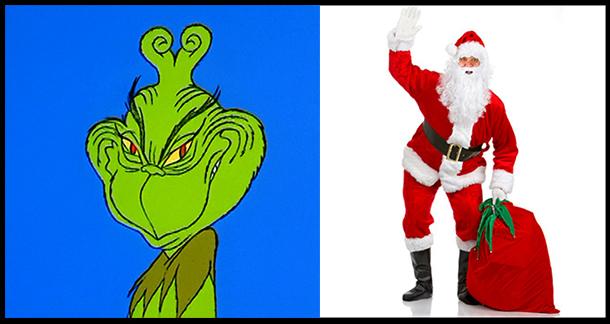 The Grinch is such a minor holiday character. He's less than a demigod in a Christmas pantheon filled with Santa, a secret brotherhood of reindeer, a talking snowman, and who knows how many elves. It’s time to give the Grinch his due. In fact, it’s time to face the truth that Dr. Seuss created a Christmas character superior to old St. Nick. What the Grinch lacks in history, he makes up for in many other ways.

Here are the reasons why the Grinch is better than Santa Claus.

Festive fur. The Grinch takes full advantage of the traditional Christmas palette. Doesn’t anyone wonder why the jolly jiggler hasn’t worked some green into his wardrobe after all these years?

He’s local. Instead of living at the North Pole, the Grinch owns an adorably dank cave nearby, so he’s available year-round.

He’s egalitarian. None of this naughty-or-nice business. The Grinch hates (and later loves) everyone equally.

A dog with fake antlers is a better sidekick than a reindeer with an inflamed nose. Besides, a glowing nose is completely useless in a storm, despite all accounts to the contrary.

He’s far less likely to get stuck in your chimney.

Burglary is less objectionable than slavery, by which I mean stealing presents seems to be a better idea than keeping an army of elves working with only one day off per year.

At least the Grinch has the decency to feel remorse for breaking into houses.

The Grinch’s origin story is way more compelling. Everyone loves a story of redemption; the prodigal Grinch, as it were. Santa doesn’t really have a character arc.

The Grinch has a much jazzier theme song.

Dr. Suess toys are infinitely more fascinating than real toys. Sure, your Xbox can play cool games, but a Wixlespotch can take you to the land of Novindips, help you find a ripe boobertyjimmit for lunch, have you home in time for tizzit, and shave your coddleydoobitermip.

I was going to propose that Jim Carrey’s Grinch was superior to Tim Allen’s Santa Claus, but it seems like both sides of that argument would be hard to support. Everybody loses on that one. So let’s leave this at ten reasons and call it a Merry Christmas.