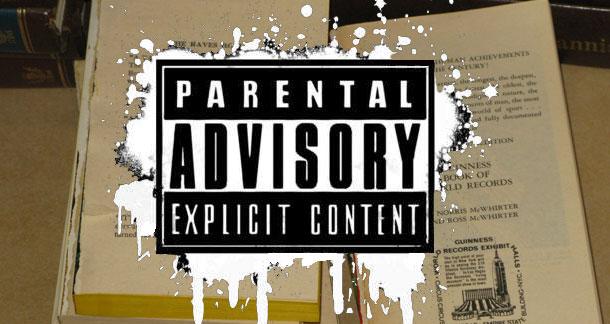 They say don't judge a book by its cover, but these designs make it awfully hard not to. From the hysterical to the offensive to the downright frightening, they are sure to elicit a gut reaction before your brain has even had time to process what it's seen. You'll laugh, you'll cry... you'll be aroused (but ashamed to admit it). Which is why we discuss these things hidden behind our computers in the public privacy of the internet.

Since making uninformed judgments turned out to be so much fun (I can see why Christians like it so much!), I decided to scour the internet for some more victims. As always, some of these are NSFW, so you might want to look over your shoulder if you're on the job. 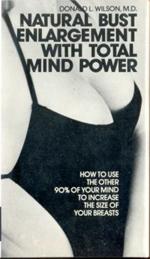 "Natural Bust Enlargement With Total Mind Power: How to Use the Other 90 % of Your Mind to Increase the Size of Your Breasts" by Donald L. Wilson, MD

In 1976, physician Donald L. Wilson published Total Mind Power: How to Use the Other 90% of Your Mind, through the Somafree Total Mind Power Institute. It was billed as "a foolproof, effortless, step-by-step procedure for using the 'idling' 90% of your mind to... learn quickly, remember names, stop smoking, enjoy sex, lose weight, retard aging, improve health, and increase memory control." We are also assured Total Mind Power is TOTALLY NOT A NEW AGE THEORY, but "a practicing physician's proven method of focusing awareness...to achieve increased mind-power." Sounds legit to me.

I don't know how well the book sold, but a few years later Wilson had the brilliant idea of ADDING BREASTS TO IT. That's right, ladies. According to the good doctor, you can increase your bust line just by thinking about it. Tired of people mistakenly trying to iron their clothes on you or ride you across a wave? Mentally modify those mammaries! Then you too can look like the woman on the cover, who appears to have a very large chest and no discernable midsection. Sexy mission accomplished! 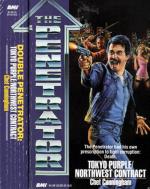 Who is The Penetrator? WHY is The Penetrator? If the Diamond Kingsesque cover is any indication, he's a mustachioed badass in a Canadian tuxedo who is lost in the Orient. That may not be the preferred nomenclature, but something tells me The Penetrator doesn't give a fuck. Because he has his own prescription to fight corruption: Death. (Although from the look of things, it appears he is doling it out over the counter. I blame Obama.)

This is just one of the many "Double Penetrator" two-fers available. It doesn't take a marketing genius to realize a double entendre like that is worth its weight in gold. Also, I'm pretty sure Tokyo Purple is a distant cousin of Steely Dan III. 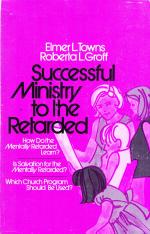 The questions posed on the cover of this overextension of the White Man's Burden belie its innocuous artwork. "Is salvation for the mentally retarded?" Holy shit, that's offensive. They're basically asking, "Does Jesus give a fuck about re-res? Do they even have souls?"

Apparently the child-like mindstate of the mentally handicapped makes them the perfect candidates to impose Jesus' will on. Not like those damn autistics, who are born without the capacity to believe in God, and are therefore condemned to hell from birth.

I can understand the value of teaching sex education to trainables, but training up a trainable in the proverbial way you think he should go? Not cool. 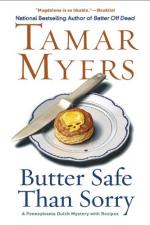 From the author of Batter Off Dead, comes another murder mystery and another delicious pun. See the pad of butter? It's melted into the shape of a skull. You'd butter not eat it. And that knife that doesn't look like it could cut through said butter? It just might wind up in somebody's neck. Or maybe this is a literary reminder that too much butter is no good for your cholesterol, and you should start using margarine instead.

But wait. I just realized that both "batter" and "butter" are used as substitutes for the same word: "better." That's a little lazy. Are there no food related puns to be made using other parts of speech? Even if Myers is sticking with a breakfast or baking motif, she could have come up with something more original, like A Waffle Way to Die or Murder, Because... Bacon. 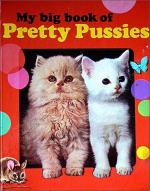 "My Big Book of Pretty Pussies" by Tony Mertz 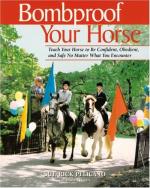 "Teach your horse to be confident, obedient and safe no matter what you encounter," even if what you encounter is high impact explosives. Because being bombproof is a learned behavior. (In case you can't tell, I'm being totes sarcastic. Everyone knows that bombproof horses are a result of breeding, not training.)

According to the book's cover, the most common place you can expect to encounter a horse bomb is at a rich kid's birthday party with valet horse service. Unless what we're looking at is a graduation ceremony for recently bombproofed horses, which also strikes me as a high risk equine event. 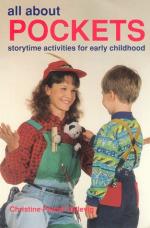 "All About Pockets" by Christine Petrell Kellevig

This book may be all about pockets, but the cover strikes me as being all about weird Scandinavian home school programs. "Okay, Sven, according to the Acid Wash Overalls of Knowledge, which item is for measuring and which is for eating? Very good! You've earned an extra five minutes at the communal herring sorter!" 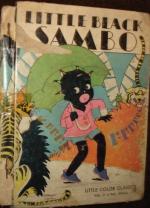 I had to include at least one classic on this list—a racist classic. First published in 1899, Little Black Sambo was written and illustrated by an insensitive Scottish crone named Helen Bannerman. It is the story of a swarthy South Indian boy who puts on a fashion show with four hungry tigers and then turns them into butter, or something like that. It wasn't until a few years later that bootleg copies of the book began to incorporate cartoonish black stereotypes, which were all the rage at the time (see accompanying image for one of the more egregious examples). Needless to say, this didn't sit well with your garden variety non-bigot. Eventually, overt racism in children's books became passe, and although there have been attempts to downplay the racist elements in recent iterations of Sambo, it has yet to reclaim its former literary glory. 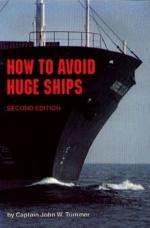 "How To Avoid Huge Ships" by Captain John W Trimmer

How could there possibly be enough material on this subject to fill 112 pages? And can the information be applied to vessels of a medium size? Because I'm willing to bet there are a lot more medium-sized ship related fatalities than huge ship fatalities. It just makes statistical sense.

I love that the POV on the cover is of someone who has successfully avoided a huge ship. It subliminally validates the purchase of the book. Which I think I'm actually going to buy. The Amazon reviews make it sound amazing:

—As the father of two teenagers, I found this book invaluable. I'm sure other parents here can empathize when I say I shudder at the thought of the increasing presence of huge ships in the lives my children.

—I bought How to Avoid Huge Ships as a companion to Captain Trimmer's other excellent titles: How to Avoid a Train, and How to Avoid the Empire State Building... After reading them I haven't been hit by anything bigger than a diesel bus. Thanks captain!

I particularly like this one-star review, entitled TOO Informative:

Read this book before going on vacation and I couldn't find my cruise liner in the port. Vacation ruined. 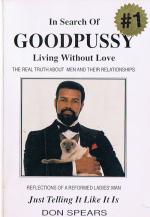 "In Search of Goodpussy: Living Without Love: The Real Truth About Men and Their Relationships: Reflections of a Reformed Ladies' Man: Just Telling It Like It Is" by Don Spears

Damn, this book's got a lot of titles. It's also got a very interesting photograph of the author on the cover. This guy is going to help you find the elusive "Goodpussy?" Whatever the hell that is? ("Cars with lots of shiny metal on them, clothes with other people's names on them and, of course, lots of pussy," apparently.) I assume once you find Goodpussy, you are going to want to hold on to it for deal life, a message which is unsubtly reinforced by the cover image. Also reinforced by the cover image? That pussy is scared out of its mind! Look at its eyes. It has seen hell, and hell's name is Don Spears. Ladies beware.

As a quick sidenote: Whence came the shiny #1 sticker in the top right corner? In what category is this book number one? Books called In Search of Goodpussy? Because the sticker is on every copy of the book, ever, and I don't think it is sanctioned by any reputable ranker of books.

This was fun. I feel so self-satisfied and superior! But let me know, was there anything I missed? Are there any truly bizarre book covers out there you would like to see me pass judgment on? And has anyone actually read any of these books? If so, I'd love to hear from you.

This is fucking amazing.

Sambo isn't the only classic on this list - ALL OF THEM ARE!!

Joshua Chaplinsky from New York is reading a lot more during the quarantine May 30, 2013 - 8:53am

@Brandon: I actually saw Cross read from Goodpussy live once.

Pretty sure we talked about the boob one on Sluttylemon - or if we didn't we soon will.

But you missed out 'Knitting With Dog Hair' (Better A Sweater From A Dog You Know and Love Than From A Sheep You'll Never Meet). Also a modern classic.

Go the Fuck to Sleep is one of my favorites.

Made my morning. But Go The Fuck To Sleep is actually a really good/funny book.

The Flintstones: Pebbles and Bamm-Bamm and the Witch Who Ran Out of Jizzle.

@Kelly: Oh. My. God. That will definitely make a future column. It deserves its own column!

Ack, couldn't stop laughing at the Amazon reviews of "How to Avoid Huge Ships." Thanks, needed that. I also need the book, since I work on aircraft carriers. 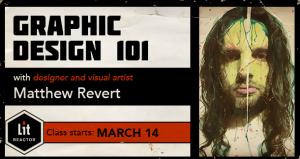