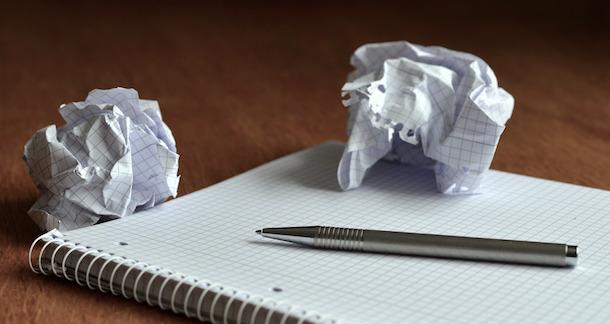 You've taken classes and workshops. You've worked and reworked your fiction, revising from feedback, honing your craft. And now, at long last, you're ready to send your fiction out for consideration by agents, editors, and publications.

But whether you're a bright young thing with the world on a string or a worldwise elder with stories to tell, these ten craft issues will make you look like a rookie—and they'll keep you stuck in the slush pile.

Avoid these, and you'll have pole-vaulted across at least 30 percent of the competition, guaranteed, be it on the desk of an agent, editor, or literary journal.

Really. That's how common these issues are.

Some writers call switching from one point of view character to another within a single scene "head hopping." Others call it POV Prostitution. Regardless of what you call it, the vast majority of editors, agents, and general readers call it a no go.

This doesn't mean you can't employ multiple points of view if it serves your story. It simply means that you only get one point of view per scene (unless your name is Charles Dickens, then you're all good).

You only get one point of view per scene (unless your name is Charles Dickens, then you're all good).

2. Lack of Line Break When Switching POV or Jumping in Time/Place

Well-made fiction is built for fast, immersive reading. When you switch points of view, jump ahead (or behind) in time, or switch locations, without indicating the upcoming jump with a line break, it's like slamming on the brakes.

Wait, says your reader, what happened back there? Did I miss something? And where are we now?

Avoid sounding like Woman in a Meeting. Run a search and destroy on any unnecessarily qualifying language in your prose before sending it out.

Maybe you're more accustomed to writing in the past tense and you decided to try a story written in present but the past keeps poking through. Maybe you decided to change the tense the story was written in during revision and didn't quite catch everything.

Maybe you're not all that sure about how tense actually works—especially when you're already writing in past tense and need to signal a change into something that happened before the story started, which requires at least a smattering of past perfect.

Regardless, you'll want to eliminate such infelicities of tense before sending your prose out for consideration. This just looks sloppy.

Speaking of tense shifting—does the story in question feature a scene that occurred before the story started, otherwise known as a flashback? If so, make sure you have clearly signaled both the entry and exit points for that flashback.

Again, fiction is made for fast, immersive reading—and because flashbacks have all the hallmarks of something happening in real time (sensory information, dialogue, etc.), if you don't put a big enough sign on the fact that we're moving back in time, your reader will likely assume we're still in the present moment of the story.

If you don't put a big enough sign on the fact that we're moving back in time, your reader will likely assume we're still in the present moment of the story.

Do your characters come right out and say what they mean at moments of high emotion? Do they readily express their opinions on emotionally sensitive topics to people with whom those opinions are likely to cause conflict? And do they do so without having to be pushed?

If so, you've written a form of dialogue that does not conform to human behavior in the wild (i.e., real life), which generally contains all manner of hedging and coded messages on loaded topics.

When you write this kind of tell-all dialogue, you not only destroy any potential for that fraught and lovely thing known as subtext, you don't have to use conflict to get people to express their most charged opinions, depriving your dialogue of narrative tension.

And tension, in case you hadn't heard, is the primary reason that readers keep turning the pages, interested to see what happens next.

Flying ninja attack? No prob: Your protagonist just happens to have mad martial arts skills. Need to get from one region of your fantasy map to another? No big deal: A bit character just happens to be able to create portals.

Writing fiction may make you feel like a god, especially when you can bend the bounds of time and space to your will, but even gods must conform to the Ineffable Laws of Story, chief of which is this: Thou shall not introduce a story element thou needest at the moment thou needest it.

Got a Chuck, Charlene, Charity, and Chase? If so, your reader is likely to forget who's who in this story—in part because of the speed at which they're reading.

Strangely enough, even the same initial sounds can get mixed up in your reader's head (i.e.,  Katie and Carrie).

While you may be attached to your characters' names, this is one of the (very) few issues in fiction that can be a simple fix: pick different names for your characters and run a Search and Replace. Problem solved.

If you're repeating a word or phrase in close proximity for emphasis or musicality (or because a variation would come across as strained), great. If not, chose something else.

It's easy to reach for the same word or phrase more than once while you're writing because it's right there at the top of your mind. But such vestiges of the first draft in your final draft will come across as sloppy; it also tends to make your reader wonder if she's read the same line twice, which will cause her to stop and reread.

"Gee, that's strange." "Well, I don't know." "Um, let's see." "Yep, that's right." In all of these examples, you could simply lop off the conversational filler at the beginning of the sentence without changing the sense, and you'd sound a lot less like a Nancy Drew mystery.

That's not to say you can't use conversational filler here and there as necessary to fill in mood or to reflect the particular rhythms of a particular character's speech. But if it's telling us something we already know, it probably doesn't need to be there.

So there you have it—my top ten list for obviously entry-level prose. Those who teach, edit, and read fiction for a living will likely have many items to add to this list, so fire away!

Creative writing teachers: Next time you're grading creative writing assignments, feel free to play bingo with this list. Once you've hit all ten, you get a stiff drink—and my condolences. =)

On a related note:

10 Reasons I May Have Rejected Your Short Story

Storyville: Ten Places to Send Your Fiction in 2015

I say needs of the story trump common practice.

Qualifying language is always present in something new I'm writing unless I'm really in the zone...

I agree totally with the first nine, I'm not sure about the last one. Too much is a bad thing, but in keeping with #6, an "I dunno" is often appropriate.

Now, if we're talking about little things people say like "I mean, blah blah important stuff..." Or "well, the thing is, blah blah important stuff..." I totally disagree. It adds to the person's voice. And when you add to that character's voice, you add to the other character who rarely or never uses "I mean"s and "well"s and so on, by having contrast.

Of course if you do it every time it gets old, but listen to some people talk. Some do it a LOT.

Great list. We all supposedly know this stuff, and hate it when we have to read it in the work of others. So, why do I keep making the same mistakes over and over....It's just housecleaning, If I never learned how to do it, gotta learn, unless I'm happy in my own little pig sty.

Also, if I feel that my work is so brilliant I don't have to abide by the rules of the road, then I shouldn't be surprised when I end up in the ditch.

I love what you said, and I am paraphrasing...if the gun goes off in act three it better be on the mantle in act one. Very nice.

Finally. As a writer, I can let myself off the hook on the little things because it's not skydiving. I won't die if I don't pack my chute properly. It's my story that dies.

Okay. Nice. Clarity. Precision. That's what I go for today. Thanks. gsr

Susan DeFreitas from Portland, OR is reading Your Heart Is a Muscle the Size of Your Fist by Sunil Yapa July 4, 2016 - 10:47pm

"Also, if I feel that my work is so brilliant I don't have to abide by the rules of the road, then I shouldn't be surprised when I end up in the ditch."

I love it, gsr--been there and done that! I've learned all of this the hard way, perhaps because I have a hard head. But you're right: it's so easy to see in anyone's work but your own.