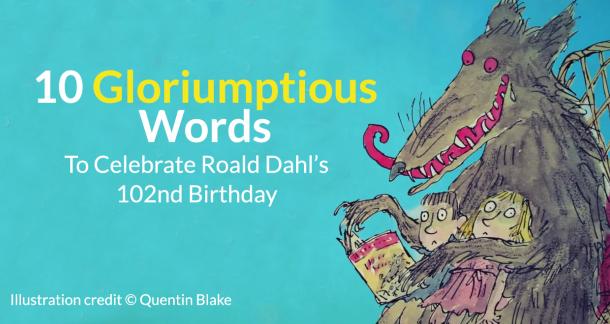 We all remember our first brush with Roald Dahl — whether it was the Candyland wish fulfillment of Charlie and the Chocolate Factory or the tantalizing terror of The Witches, Dahl always had a knack for the eccentric and unforgettable. Nowhere was this truer than his vocabulary: by the most conservative of estimates, Dahl invented hundreds of unique words throughout his literary career. Some have even been added to the dictionary!

Despite their plenitude, we don’t quite have the time to give you 102 words for Dahl’s 102nd birthday, so we’ll just stick to ten of the best. Read on to discover (or rediscover) these ten gloriumptious “Dahlisms” that are sure to give your conversations some serious oomph!

Though it’s often used by Dahl enthusiasts to refer to the Dahlian vernacular, gobblefunk was actually invented by the man himself! Originally used to chastise someone for meddling with the English language, this term now seems deeply ironic, coming from a writer who did practically nothing but gobblefunk.

As seen in The BFG, when the Giant becomes frustrated with Sophie’s inability to understand his linguistic applications:

This one should be pretty self-explanatory, but it’s such a pleasing phrase that it merits its own entry. Human bean is what the BFG calls everyone from Sophie to the Queen of England — his own gobblefunking of “human being,” of course.

As seen in The BFG again, its appropriate usage confusing both Sophie and the Giant: 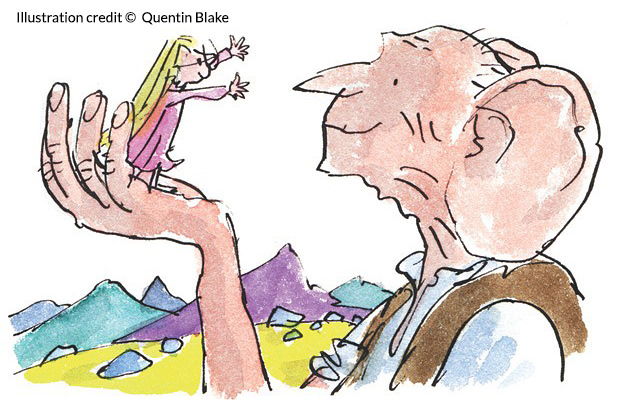 Although The BFG is Dahl’s magnum opus of made-up words (and magical worlds), his penchant for invention was established much earlier. In his 1975 book Danny, the Champion of the World — in which the BFG first appears as a bedtime story told by Danny’s father — Dahl coins a word to connote a level of excellence that “splendid” cannot convey. That word is none other than splendiferous.

As seen in Danny, the Champion of the World, when Danny’s father reveals himself to be a talented poacher, just like his father before him:

“Your granddad,” he said, “my own dad, was a magnificent and splendiferous poacher. It was he who taught me all about it. I caught the poaching fever from him when I was ten years old and I’ve never lost it since.”

About as far from splendiferous as you can get. A portmanteau of “vermin” and “pernicious,” it’s one of the few Dahlisms to appear in more than one book! This word denotes something so vile, so truly disgusting, it transcends the English language.

As seen in James and the Giant Peach, and later in Charlie and the Great Glass Elevator, when the characters encounter frightful-looking creatures known as Knids:

“Snakes and ladders!” yelled the Head of the Fire Department. “We are finished now! It’s a giant Scorpula!”
“It’s worse than that!” cried the Chief of Police. “It’s a vermicious Knid! Oh, just look at its vermicious grueseome face!”

For all the words about things unimaginably awful, there are still plenty of Dahlian terms to convey the unimaginably lovely. Scrumdiddlyumptious is one such word, and it’s blossomed into a fantastic term for anything so divinely scrumptious, we just can’t express it without that extra “diddly” in the middle.

As seen in The BFG, who uses it to further relay the tastes of different human beans (according to the Bonecrunching Giant):

“Bonecrunching Giant says Turks is tasting oh ever so much juicier and more scrumdiddlyumptious [than English people]! Bonecruncher says Turkish human beans has a more glamourly flavour. He says Turks from Turkey is tasting of Turkey.”

Dahl had a true gift for inventing things that were so irresistible, his readers felt compelled to bring them into the real world. Sadly, one of the most famous Dahlian creations is something we’re not likely to see in our lifetime (at least not in the logic-defying form it’s meant to take): the Everlasting Gobstopper. 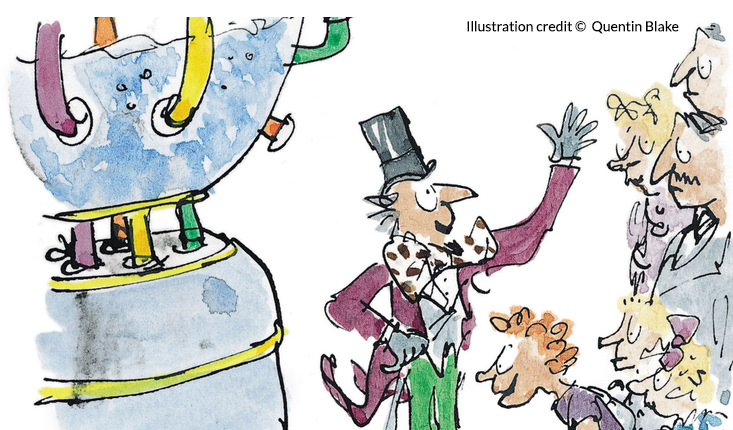 Churgle comes to us through the same avenue as “vermicious”: a combination of two similarly amusing words (in this case “chuckle” and “gurgle”). Therefore to churgle is to chuckle with such delight that it produces a gurgling sound — indeed, the way we all laugh at the delightfully ridiculous scenarios of Roald Dahl.

As seen in Fantastic Mr. Fox, as the Fox family carries out their scheme to steal an enemy farmer’s chickens:

The fact that it was none other than Boggis’s chickens they were going to eat made them churgle with laughter every time they thought of it.

Some Dahlian words are neologisms for completely invented things, whereas others are synonyms for pre-existing words. At first glance, whizzpopping seems to belong to the former camp, especially in nounified form — what on Earth is a whizzpopper? However, whizzpopping is a very earthly phenomenon, and something you’ll recognize with a smile as you read on.

As seen in The BFG, when he describes the happy results of drinking frobscottle — a sparkling beverage whose bubbles move down instead of up:

“If they go down instead of up, they’ll be coming out somewhere else with an even louder and ruder noise [than burping],” said Sophie.
“A whizzpopper!” cried the BFG, beaming at her. “Us giants us making whizzpoppers all the time! Whizzpopping is a sign of happiness! It is music in our ears!”

Conjuring up thoughts of frumpy and frustrating, this word once again subverts linguistic logic (as most Dahlisms do in one way or another). Frumptious actually means exciting or pleasant — though again, as with scrumdiddlyumptious, it’s initially used in a less-than-savory context…

As seen in The Witches, after The Grand High Witch reveals her master plan to turn children into mice using tainted sweeties: 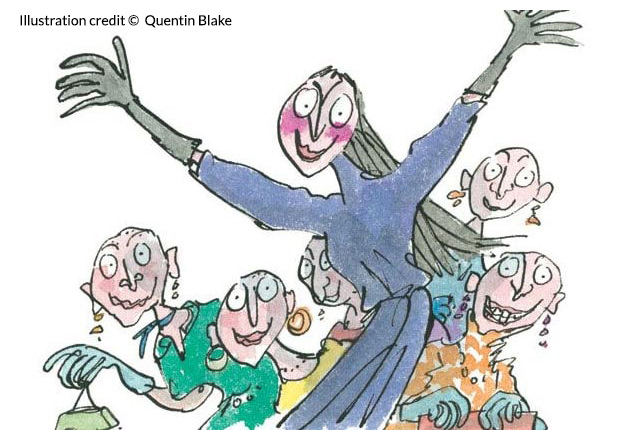 So wrote William Shakespeare, one of the greatest gobblefunkers of all time. But even he never made up a word to mean the actual substance of dreams. Roald Dahl did, though: zozimus. Whether you’re having a phizzwizard or a trogglehumper (a wonderful or horrifying dream respectively — and bonus Dahlisms for you!), zozimus is what makes them all possible.

As seen in The BFG, as the Giant teaches Sophie about the nature of dreams, which he mixes and blows into children’s bedrooms at night:

Flashes of green and blue exploded inside the jar. The dreams were being whisked into a sea-green froth.
“The poor things!” Sophie cried.
“They is not feeling it,” the BFG said as he turned the handle. “Dreams is not like human beans or animals. They has no brains. They is made of zozimus.”

There you have it. The very best Dahlisms, from A to Z — or A to Zozimus, as it were. In honor of Dahl: carry them carefully, use them wisely, and most importantly, never lose the spirit of the child who loved reading them so much.