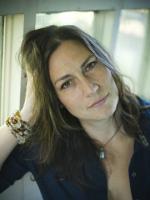 Vanessa Veselka (Portland, OR) has been, at various times, a teenage runaway, a sex worker, union organizer, a student of paleontology, an expatriate, a train-hopper, a waitress, and a mother. Her work has appeared in The Atlantic, Tin House, Bitch: Feminist Response to Pop Culture, and elsewhere. She has been featured on APR/ American Public Radio’s “The Story” and Zazen, her first novel, is a finalist for the 2011 Oregon Book Award.