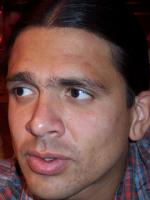 Stephen Graham Jones has ten novels and more than a hundred and thirty short stories published, and has been teaching fiction for twelve years. 2012 will see at least two more novels from him, then at least one in 2013 and one in 2014, he says, "should the world not have ended by then."