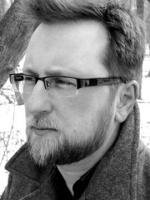 Simon Strantzas is the author of Burnt Black Suns (Hippocampus Press, 2014), Nightingale Songs (Dark Regions Press, 2011), Cold to the Touch (Tartarus Press, 2009), and Beneath the Surface (Humdrumming, 2008), as well as the editor of Aickman’s Heirs (Undertow Publications, 2015) and Shadows Edge (Gray Friar Press, 2013). His writing has been reprinted in The Mammoth Book of Best New Horror, The Best Horror of the Year, The Year’s Best Weird Fiction and The Year’s Best Dark Fantasy & Horror; has been translated into other languages; and has been nominated for the British Fantasy Award. He lives in Toronto, Canada, with his wife and an unyielding hunger for the flesh of the living.