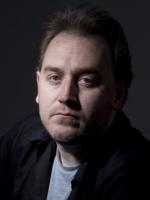 Sean Hogan is a writer and filmmaker based in the UK. He has a BA Honours degree in Film and has worked extensively as a screenwriter and director.

His films as director include Lie Still, The Devil’s Business, and We Always Find Ourselves in the Sea,and he also produced the feature documentary Future Shock! The Story of 2000AD, all of which enjoyed widespread international festival runs and distribution.

In addition, he has written several produced screenplays, most recently Firstborn and Daddy's Girl, and also co-wrote the script for the UK hit The Borderlands. In collaboration with Kim Newman, he co-created the anthology plays The Hallowe’en Sessions and its follow-up, The Ghost Train Doesn’t Stop Here Anymore, and directed both their West End runs. He has also published a critical monograph on the 1970s cult film Death Line.

His recent projects include adapting the critically-acclaimed memoir House of Psychotic Women into a TV pilot (currently in development), prepping a new feature film, Other Places, and the upcoming novel, England's Screaming (due to be published in 2020).