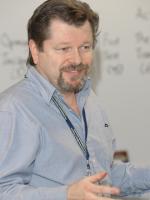 Since selling his spec script K-9 in 1987, Scott Myers has written nearly 30 projects for every major Hollywood studio and broadcast network. His film writing credits include K-9, Alaska, and Trojan War. In 2002, he began teaching screenwriting in his spare time. He won the UCLA Extension Writers' Program Outstanding Instructor Award in 2005 and currently teaches at the University of North Carolina in Chapel Hill. He is co-founder of Screenwriting Master Class, an online resource for writers. Scott is a member of the Writers' Guild of America, west, and a graduate of the University of Virginia and Yale University Divinity School.