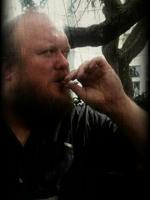 Pete Dragovich has written reviews and articles on crime fiction, film and television for magazines and blogs such as Crime Factory, Spinetingler Magazine, Bookspot Central, Hardboiled Wonderland, and his own blog, Nerd of Noir.  He lives in Minneapolis and has few non-substance abuse interests beyond books, movies and television.  He wishes he gave as much of a shit about music as he did in his early twenties.