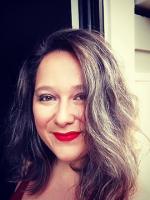 Pam van Hylckama Vlieg is a literary agent at D4EO Literary. She represents a broad range of genres from kid lit to adult genre fiction. Pam is published in several anthologies and writes picture books and graphic novels. Her latest credit is a chapter in The Complete Guide to Writing for Young Adults published by Dragon Moon Press. Her authors include Dan Gemeinhart, Nick Courage, JC Nelson, and Vivi Barnes.

She lives in the Bay Area of California (where she still thinks the weather is cold) with a bookseller roommate. Together their books are taking over the house. Eventually all that will be left is sitting room for two on the sofa and a slice of space for the cat. In her spare time Pam reads copious amounts of comics, cooks inedible dinners, and one time she almost knitted a thing.