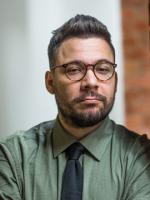 Nicolás Obregón is an internationally published author with book deals in the US, UK, EU, and beyond. His debut novel, Blue Light Yokohama, was declared by NPR Radio as ‘a stunning debut, polished literature, so freaking brilliant that I want to scream...’ The novel was also hailed by major UK- based newspapers such as The Guardian and The Daily Mail, while The Daily Express described it as: ‘an outstanding, exceptional, beautifully-written debut...’ His forthcoming novel, Sins as Scarlet, has already been announced by renowned novelist Jeffery Deaver as ‘a masterpiece’, while bestselling sensation AJ Finn labelled it ‘extraordinary stuff... I’m awestruck.’ Obregón's writing has been nominated for several prestigious international awards. He is a graduate of the acclaimed Birkbeck Creative Writing Masters course and a former bookseller for Waterstones.