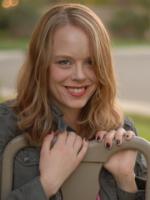 Melissa Olson was born and raised in Chippewa Falls, Wisconsin, and studied film and literature at the University of Southern California in Los Angeles. After graduation, and a brief stint bouncing around the Hollywood studio system, Melissa proved too broke for LA and moved to Madison, WI, where she eventually acquired a master’s degree from UW-Milwaukee, a husband, a mortgage, a teaching gig, two kids, and two comically oversized dogs, not at all in that order.

She loves Madison, but still dreams of the food in LA. (Literally. There are dreams.) Along with her Scarlett Bernard novels Dead Spots, Trail of Dead, and Hunter’s Trail she has also released a mystery novel, The Big Keep. Melissa’s work has been published in the Daily Trojan, the Chippewa Falls Herald Telegram, The International Journal of Comic Art, The La Crosse Tribune, U-Wire, Women on Writing.com, and the compilation Images of the Modern Vampire. She has also presented or been on panels at the Midwest Popular Culture/American Culture Conference, the International Association of the Fantastic in the Arts Conference, OdysseyCon, and EncountersCon in Wichita.