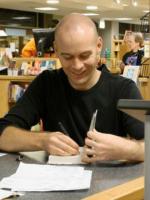 Max Barry is an Australian who pretended to sell high-end computer systems for Hewlett-Packard while secretly writing his first novel, Syrup (1999). In fact, he still has the laptop he wrote it on because HP forgot to ask for it back, but keep that to yourself. He put an extra X in his name for Syrup because he thought it was a funny joke about marketing and failed to realize everyone would assume he was a pretentious asshole. Jennifer Government, his second novel, was published in 2003 without any superfluous Xs and sold much better.

Max's third novel, Company, was published in 2006, and his fourth, Machine Man, based on a real-time interactive serial written and delivered one page a day from this web site, is now available.

Max is also the author of the online political game NationStates, for which he is far more famous amongst high school students and poli-sci majors than his novels.

He was born March 18, 1973, and lives in Melbourne, Australia, where he writes full-time, the advantage being that he can do it while wearing only boxer shorts.