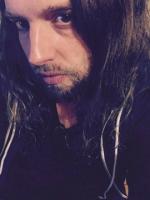 Matthew Revert is a designer, writer and musician from Melbourne, Australia. He has developed a reputation as one of the preeminent graphic designers in the small press world, having given his unique touch to over 500 books. His design work is regularly featured in best-cover-of-the-year lists. In addition to his work as a designer, Revert is a critically acclaimed novelist with books published by the likes of Lazy Fascist and Dark Coast Press. In recent years, his work as a musician has gained attention with releases by high profile record labels such as Kye and Erstwhile Records.