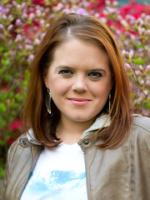 Kelly Fiore has a BA in English from Salisbury University and an MFA in Poetry from West Virginia University. She received an Individual Artist Award from the Maryland State Arts Council in 2005 and 2009. Kelly’s poetry has appeared in Small Spiral Notebook, Samzidada, Mid Atlantic Review, Connotation Press, and the Grolier Annual Review. Her first young adult novel, Taste Test, was released in August 2013 from Bloomsbury USA, and her second, Just Like the Movies, again from Bloomsbury, was releasted in 2014. She is also the author of Thicker Than Water released by HarperTeen in 2015. Kelly lives and teaches in West Virginia with three children, two dogs, one hedgehog, and a very patient and loving husband.