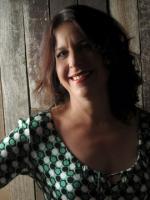 Kaaron Warren has lived in Melbourne, Sydney, Canberra and Fiji. She’s sold many short stories, three novels (the multi-award-winning Slights, Walking the Tree and Mistification) and four short story collections. Two of her collections have won the ACT Publishers’ and Writers’ Award for fiction, and her most recent collection, Through Splintered Walls, won a Canberra Critic’s Circle Award for Fiction, and is shortlisted for nine Australian SF awards.

Her stories have appeared in Australia, the US, the UK and elsewhere in Europe, and have been selected for both Ellen Datlow’s and Paula Guran’s Year’s Best Anthologies. She was shortlisted for a Bram Stoker Award for her short story “All You Can Do is Breathe”, and is Special Guest at the Australian National Science Fiction Convention in Canberra 2013.