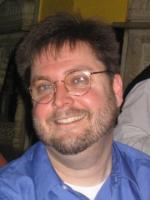 John Langan received his MA from SUNY New Paltz and his M.Phil from the CUNY Graduate Center. His stories have appeared in The Magazine of Fantasy & Science Fiction and anthologies including The Living Dead (Night Shade 2008), Poe (Solaris 2009), By Blood We Live (Night Shade 2009), Supernatural Noir (Dark Horse 2011), Blood and Other Cravings (Tor 2011), and Ghosts by Gaslight (Harper Collins 2011).

His first collection, Mr. Gaunt and Other Uneasy Encounters, was published in 2008; his first novel, House of Windows, appeared the following year. With Paul Tremblay, he has co-edited Creatures: Thirty Years of Monster Stories (Prime 2011). His essays on horror writers have appeared in Fantasy Commentator, The Internet Review of Science Fiction, The Lovecraft Annual, Lovecraft Studies, The New York Review of Science Fiction, and The Weird Fiction Review. He has served as a juror for the Shirley Jackson Awards.

He is an adjunct instructor at SUNY New Paltz, where he teaches creative writing and gothic fiction.