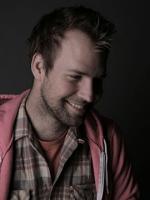 Joe Biel is a self-made publisher and filmmaker who draws origins, inspiration, and methods from punk rock. He is the founder/manager of Microcosm Publishing and co-founder of the Portland Zine Symposium. He tours with his films on the Dinner and Bikes program and has been featured in Time Magazine, Publisher’s Weekly, Utne Reader, Portland Mercury, Oregonian, Broken Pencil, Readymade, Punk Planet, Profane Existence, Spectator (Japan), G33K (Korea), and Maximum Rocknroll. He is the author of Good Trouble: Building a Successful Life & Business with Asperger's, Manspressions: Decoding Men's Behavior, Make a Zine, The CIA Makes Science Fiction Unexciting, Beyond the Music, Bamboozled, Bipedal, By Pedal, and more. He is the director of the documentaries Aftermass: Bicycling in a Post-Critical Mass Portland, If It Ain't Cheap, It Ain't Punk, Of Dice & Men, $100 & A T-Shirt, and the Groundswell film series. The Journal of Adolescent & Adult Literacy described Biel as "not trained in pedagogy."