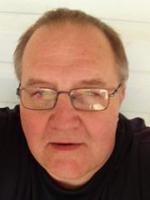 Jeffrey Ford is the author of the novels, The Physiognomy, Memoranda, The Beyond, The Portrait of Mrs. Charbuque, The Girl in the Glass, The Cosmology of the Wider World, and The Shadow Year. His story collections are The Fantasy Writer's Assistant, The Empire of Ice Cream, The Drowned Life, and Crackpot Palace.

His short fiction has appeared in numerous journals, magazines and anthologies, from MAD Magazine to The Oxford Book of American Short Stories. Ford is the recipient of the World Fantasy Award, Nebula, Shirley Jackson Award, Edgar Allan Poe Award, and the Grand Prix de l'Imaginaire.

In addition to writing, he’s been a professor of literature and writing for over 25 years, and has been a guest lecturer at Clarion Writing Workshop, The Stone Coast MFA Program, and The Richard Hugo House in Seattle. This summer, he will participate in the Antioch University Writing Workshop. He lives somewhere in Ohio.