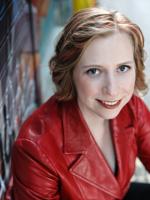 Helen Marshall is an award-winning Canadian author, editor, and doctor of medieval studies. Her poetry and fiction have been published in Abyss & Apex, Lady Churchill’s Rosebud Wristlet, Tor.com and have been reprinted in several Year's Best anthologies. She has published two chapbooks of poetry, and her debut collection of short stories, Hair Side, Flesh Side (ChiZine Publications, 2012), was named one of the top ten books of 2012 by January Magazine. It won the 2013 British Fantasy Award for Best Newcomer. Her second collection of short stories, Gifts for the One Who Comes After, will be published in September 2014.