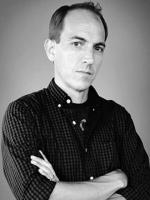 Eric Beetner has been described as “the James Brown of crime fiction – the hardest working man in noir.” (Crime Fiction Lover) and “The 21st Century’s answer to Jim Thompson” (LitReactor).

His 20th published novel is The Devil At Your Door, the finale in the Lars & Shaine trilogy.

His award-winning short stories have appeared in over three dozen anthologies. He co-hosts the podcast Writer Types and the Noir at the Bar reading series in Los Angeles.