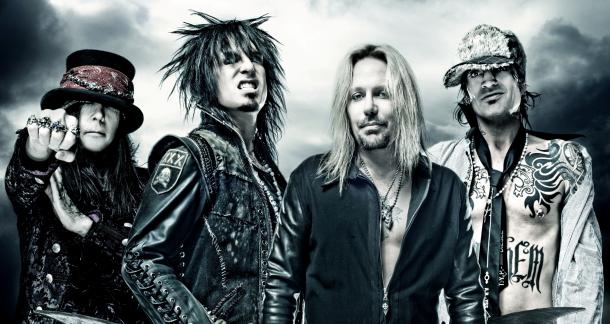 It's been ten years since journalist and world-famous pick-up artist Neil Strauss unleashed his biographical masterpiece, The Dirt: Confessions of the World's Most Notorious Rock Band on an unsuspecting world.

When The Dirt was first published, Motley Crue were celebrating their twentieth anniversary--a logical point to assess their cultural impact. After all, by 2001, to say that the quality of their sonic output had plateaued would be awkwardly generous. Their most recent release at the time was 2000's New Tattoo, an album so anticlimactic that many Crue fans were unaware of its release until many years later.

By 2001, anyone picking up The Dirt could reasonably assume that although Motley Crue continued to release new music, the purchase would not be premature. There appeared little risk that one more white-knuckled chapter was waiting to be written.

A decade later, we see that those people were dead on. Short of Motley Crue curing cancer at some point in the future, it is safe to say that The Dirt contains all aspects of the band's story worth reading.

Still, what a story.

Regardless of one's opinions of Motley Crue, The Dirt is a wind-in-the-face joyride, and ten years later, with the release of the biography's Anniversary Edition, we are reminded why it remains one of the best rock biographies ever written.What blew everybody's mind was just how good the book turned out to be. The Dirt was the book that boyfriends bought for themselves and their girlfriends ended up reading. It was the book that one guy at work read, and after sharing one or two stories with his co-workers, the rest of the office would run out and pick it up. The Dirt was like a pile of drugs sitting on a table--no one wanted to touch it, but once they did, they were all in.

The stories come straight from the mouths of the four horses: Nikki Sixx, Mick Mars, Tommy Lee and Vince Neil. Without their participation, The Dirt would amount to little more than a monument to deforestation. Many of the tales had already been told in magazines, gossip columns and court documents. Herein lies the secret ingredient to The Dirt: these stories are finally colored by what the band were thinking and feeling when it all went down. They didn't simply describe what rock stars did, they described how it felt to be a rock star, in ruthlessly candid terms.

Moreover, the way that Strauss organizes the book is brilliant. Chapters alternate between musicians and other band associates, with each person telling their story (or their side of it) uninterrupted by author or bandmate. Strauss does not weave the stories together into a single narrative; instead, The Dirt reads as if Strauss sequestered the musicians in separate interview rooms and then wrote the book by walking from room to room, capturing what the men were saying. Consequently, the band had the freedom to not just tell their own stories, but to offer profane and critical assessments of the others.

The Dirt  is packed with eye-popping stories about drug abuse, violence and an ocean of sexual trysts that would make the Marquis de Sade take up accounting.

Often, the musicians share something with the reader that they have yet to share with the rest of the band, such as the chapter where Nikki Sixx confesses to sleeping with Tommy Lee's old girlfriend, ending his story by saying that he has never had the courage to come clean to Lee. The next chapter begins with Tommy Lee gushing about this very girl, blissfully unaware that she had slept with one of his best friends. Presumably, Lee discovered this fact the same way the reader did.

Producer Scott Humphrey, ex-frontman John Corabi and former manager Doc McGhee deliver colorful and often amusing observations that the musicians lack the capacity to admit. The material insights of such people infuse the stories with much-needed objectivity. "I've managed Mink DeVille, James Brown, the Scorpions, Skid Row, Bon Jovi, and KISS," says McGhee. "I've been dragged through the deepest shit by all kinds of mentally ill people. But I have never been through what Motley Crue put me through."

By the time the reader arrives at McGhee's assessment, they understand exactly what he means because the book thoroughly delivers on the promise implied by its title. The Dirt is packed with eye-popping stories about drug abuse, violence and an ocean of sexual trysts that would make the Marquis de Sade take up accounting. While the sex and drug stories eventually take on a cartoonish hue, the real dirt is the ample violence and duplicity that form the backbone of the band's outlook.

Suspecting that a man had committed the unthinkable offense of introducing Nikki Sixx's ex-girlfriend Lita Ford to another guy (Sixx admits he had no interest in Ford anymore), Sixx and Tommy Lee visit the man with two-by-fours and beat him until his blood spatters across the wall, only to discover that the poor guy was innocent of the supposed wrongdoing. Sixx appears to offer this story as a showcase of how menacing he could be, but instead the story exposes the cowardly underbelly of the protagonists. That not one but two big men would beat up a "little punk rocker," with planks no less, speaks to their immature and nearly sociopathic world view. Collectively they emerge as egomaniacs with a gigantic inferiority complex.

One truth these stories underscore is that these heavy metal antiheroes did not sell 80 million albums out of dumb luck--they went multi-platinum the old fashioned way: perseverance and hard work, much of which involved atrocities inflicted upon strangers, their loved ones and each other. Ultimately what grounds this story is the intervention of karma. The band pay a hefty price for their excesses and their story is thick with death, addiction, jail and depression.

Vince Neil knows this better than most. He killed his friend Razzle in a drunk driving accident and later lost his four year-old daughter to cancer, stories which he tells with punishing emotional honesty.

Sixx's story about finding a sister that he never knew existed provides one of the book's unexpected gut punches, while Mick Mars struggles with a debilitating condition that renders standing up, let alone playing guitar, to be a profound physical challenge. Tommy Lee's violent, misogynistic behaviors land him in jail. With guards down, they share raw feelings that create space for the reader to not just relate to them, but to feel empathy for the broken rock and rollers.

From a bunch of L.A. nobodies looking to hit the big time to a stint as the biggest band on the planet, their story reads like a Greek odyssey, packed with hedonism, hubris, the single-minded quest for immortality and vicious brotherly infighting. In the capable hands of Neil Strauss,The Dirt remains one of the most satisfying reads of the past thirty years.

Joshua Chaplinsky from New York is reading a lot more during the quarantine February 13, 2012 - 6:32pm

I will not lie, this book rules.

The Dirt is the most debaucherous bio out there. And i'll say it again, the Corabi album is their best.

Yeah, they really nail it in the debauchery department. One of the amazing things about the volume of it all is that it never quite gets stale.

Stoker- I'm stoked you said that about the Corabi album. While that album isn't my favorite Crue album, "Hooligan's Holiday" is easily in my top five Crue tracks. Great album that has been criminally underrated.

Stoker- Corabi's album isn't my favorite (like Joe), but it IS vastly underrated. Corabi was a great vocalist and hell of a song writer and got a bum deal on the whole thing.