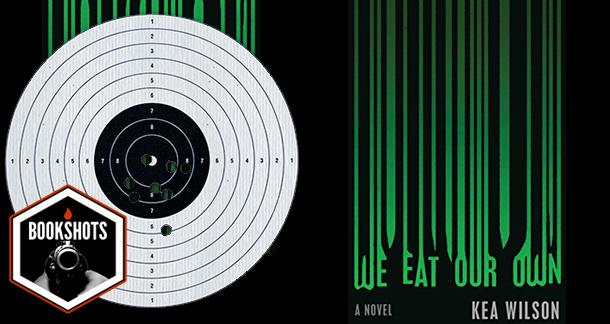 We Eat Our Own

The way Wilson is able to spin a sentence and describe violence is akin to a beautiful poem carved into a corpse’s rotting flesh.

Kea Wilson, a bookseller from St. Louis. This is her first novel.

A struggling actor gets summoned to South America for a leading role in a bizarre new horror film titled Jungle Bloodbath.

Ugo: The director of Jungle Bloodbath. Maybe insane, maybe a genius, probably both.

A small South American village called Ovidio in 1979. Land of mosquitoes and monkeys and snakes. Walk outside for two seconds and every insect imaginable is eating you alive. I think I’ll pass on this one.

I saved a couple favorites:

You didn’t realize, then, that this can be the first thing to erode, after you’ve settled into loving someone: you lose your obligation to be kind.

Biology tells him that nearly every insect in the air right now will die by morning, and Ugo knows that for the rest of his life this will be the sound of death for him: the backdrop of a hundred thousand minuscule wingbeats under the bark of tropical bats, and somewhere in the center of that sound, the crackle of a hundred thousand new eggs hatching.

There’s no such thing as murder in the jungle.

You are lucky enough to have a brother who shows you Cannibal Holocaust at a young enough age that you believe everything you see in the movie is real. You watch it in full, resisting the urge to vomit, the need to turn away and cry. The sick feeling in your stomach will not subside for a very long time. Eventually you will forget about it, until many years later you read the debut novel of author Kea Wilson, titled We Eat Our Own, which it turns out is loosely adapted from both the narrative structure as well as the controversy surrounding Cannibal Holocaust.

You will begin reading We Eat Our Own and immediately stop at the realization that you’re about to invest your time into a novel written in second-person, and you receive a giddy thrill. Not enough writers utilize second-person, you think, and it’s always a treat when you accidentally stumble across one. Sure, just like any other narrative POV, second-person can be easy to screw up, but luckily Wilson handles this style like a pro.

The second thing you notice is, holy crap, this book lacks quotation marks. Just like Cormac McCarthy, the dialogue blends into the action. You have to pay attention to determine when someone is talking, and who is the speaker. Normally you’d get upset at this choice, but once again, Wilson shows her chops, and the book actually benefits from this form of writing.

This will not be the first comparison you make to McCarthy.

The way Wilson is able to spin a sentence and describe violence is akin to a beautiful poem carved into a corpse’s rotting flesh. You will not merely read about the Amazon jungle. You will be transported there, thrown into the mud and shit, and know what it is like to breathe in its stench. You will feel disgusting and you will love it.

We Eat Our Own will impress you in numerous ways. From its well-researched horror film history, to its ability to casually weave together multiple storylines. We Eat Our Own should not be a debut novel. It should be the release of a horror veteran. But here you go. Here it is. Waiting to be consumed. So consume it.