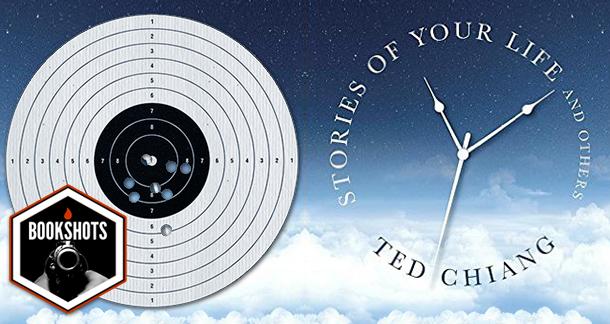 Stories of Your Life and Others

Ted, he’s at the top of his class. He’s the King on the Hill, screaming alien math equations into the stars.

Ted Chiang, author of only 15 short works of fiction, but regarded as perhaps one of the best science fiction writers of all time, and for good reason.

Cool people kicking the world’s ass with the power of science. Or, how I described it to the waitress who asked what I was reading the other day at IHOP: “Oh, you know, just a bunch of fuckin' nerds doing nerd-stuff. And more coffee, please, thank you.”

An Unstoppable Boner for Math

Some people, they wake up, go to work, distract their minds for eight hours, then come home and watch TV and try to forget the same thing awaits them the next day, and the day after that. But those other people? The ones who care about the future, who are bursting of curiosity? That’s who occupies the pages of this book. Prepare to become intimate with them.

When I try to picture smart, successful scientist people, all that comes to mind is Mark Ruffalo and Tilda Swinton passionately making out. I hope that helps?

I had a hard enough time passing math in high school. I don’t think it’s a good idea for anybody to put me in a position to manage numbers. If you gave me an equation and told me it needed to be solved by next year otherwise the world would explode, well, you'd need to start telling your loved ones what they really mean to you, because ka-blam.

Her concentration was gone, and last night she had had a nightmare about discovering a formalism that let her translate arbitrary concepts into mathematical expressions: then she had proven that life and death were equivalent.

I’m not going to claim to have read a lot of science fiction. I’m more of a crime and horror kinda guy, if we’re being honest here. But I’ve heard enough praise about Ted Chiang to know I’d be a fool to ignore his book.

Let me tell you about Ted Chiang. The man is too goddamn smart for his own good. The concepts he’s developed in this book are insane. He’s only published 15 stories since he started in the ‘90s, and I’m not surprised. I can’t even imagine how long it must take to write a Ted Chiang story. The amount of research and concentration each one must have taken surely would have caused multiple head explosions in lesser writers. But Ted, he’s at the top of his class. He’s the King on the Hill, screaming alien math equations into the stars.

Stories of Your Life and Others begins with “Tower of Babylon”, a story with a fairy-tale feel about the infamous biblical tower. I’m not remotely religious, and I know about Babylon. Odds are you also do. And you bet your sweet ass Chiang does, too, only of course he knows about it more than anybody out there. I wouldn’t be surprised to learn Chiang built his own Tower of Babylon just to research the story, that’s how authentic the mechanics of this tower feel. But another thing about this story, surprisingly, is how much it succeeded in terrifying me. This is a bonkers combo of claustrophobia and acrophobia, a mix guaranteed to raise a few hairs and drain a few pores.

Next up we have “Understand”, which is about a super-nerd battling another super-nerd. I never saw that movie, Limitless, but I feel like—based off the trailers—it was a direct rip-off of Chiang’s story. If you ever needed proof that nerds kind of suck, here you go.

There are many other stories in this collection, all of them good in their own ways, but the absolute winner is “Story of Your Life”. I possess no hyperbole when I tell you this might be one of the best short stories I’ve ever read—or ever will. Aliens visit Earth and humans attempt to study their language. What follows next is an insane work of genius I’m too afraid of spoiling, so I’ll just say this:

Go read the book. Your brain deserves it.

The film adaptation of "Story of Your Life" is expected to release in 2016. Starring Amy Adams and Jeremy Renner, and directed by Denis Villeneuve.

Hell to the yeah. Well, on everything but the Jeremy Renner part.

I'm having a really hard time seeing how this could be a film. Which makes me even more excited to watch it.