Bookshots: 'Loving the Ocean Won't Keep It From Killing You' by Rachel Bell 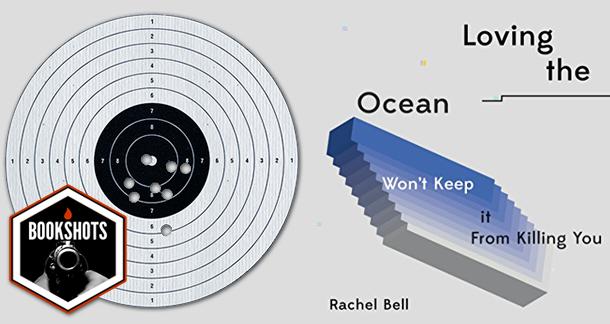 Loving the Ocean Won’t Keep It From Killing You

It is rare to read something so personal and hilarious and depressing and beautiful all at once.

Rachel Bell, a writer based in Chicago.

A woman attempts to cope with a history of sexual abuse and depression.

Uh, I'm sorry, but there’s no way I’m even gonna try coming up with a better title than Loving the Ocean Won’t Keep It From Killing You.

Books with brutally honest narrators about what it’s like growing up in the Internet age.

We’re bouncing around from New York City to New Mexico to Ohio and the only place I’d want to spend a significant amount of time is probably New York City.

They had sex in the shower and she saw that the tattoo on his chest said “Never Say Die.” While he fucked her from behind she whispered, “Die.” He stopped moving and said “What?”

Brace yourself for a bullet through the gut. Quick to pierce your flesh, but the pain will be eternal.

Bell’s prose is minimalism at its finest. Each sentence reads like someone’s initials carefully carved into the flesh of a tree. Loving the Ocean is a novella with not a word to spare. Bell takes us on a nonlinear journey through a woman’s history of sexual abuse, lovers, drug addiction, and depression.

It is rare to read something so personal and hilarious and depressing and beautiful all at once. The Internet is a super fucking dangerous tool that can destroy a person’s life and also save it. In Loving the Ocean, Bell shows us just how intense the Internet can make a teenage girl’s life, and how the consequences can affect her for years.