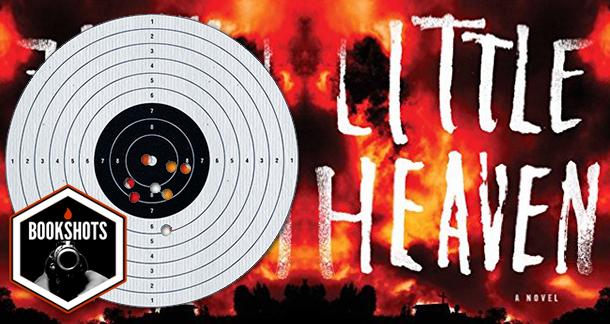 The creatures haunting 'Little Heaven' are original, yes, but the more you think about them, the more hilarious they seem.

Nick Cutter, author of The Troop and The Deep. Horror pen name for Craig Davidson.

Creepy Shit in the Woods

Micah, “a man who some said was so cool that he drank boiling water and pissed ice cubes.”

Minerva, a rookie bounty hunter later blessed/cursed with an inability to be killed.

Ebenezer, a British hired-gun who speaks how an Urban Dictionary editor might imagine someone from 1960’s England talking.

Ellen, the woman who hires the three mercs, and eventually becomes Micah’s wife.

A weird religious compound in the woods called Little Heaven, surrounded by PURE EVIL? Sign me up.

The man the townsfolk knew as Gardener walked into the Glory with a Deathstalker in a glass jar.

Here is a good tip for all you writers out there: next time you feel the urge to describe a horse’s penis, just turn off your computer and go for a walk or masturbate or whatever it is you have to do to rid yourself of this insane desire. Horse genitalia is just one of many unnecessary details overflowing from the pages of Nick Cutter’s latest novel. Here is another bit of advice: you do not have to provide biographies on every side-character who brushes past your protagonists. Good characterization does not equal interrupting the flow of a story to add multiple pages of background information nobody really cares about.

Little Heaven bounces back and forth from the 1960s to the 1980s. In the 1960s story, three mercenaries are hired by a woman to save her nephew from a whacko religious cult in the woods. They encounter a genuinely terrifying presence deep in the forest while traveling to the compound during the night. This is where Cutter shines, his ability to creep under your skin with disturbing implications of what’s hiding in the darkness. However, this is also a case where not knowing what the “monster” looks like is sometimes far scarier than discovering its actual appearance. Cutter has guts, I’ll give him that. He doesn’t hold back in his attempt to create an original, terrifying monster in a genre already oversaturated with stale imitations of other monsters. The creatures haunting Little Heaven are original, yes, but the more you think about them, the more hilarious they seem. I feel like I shouldn’t even spoil it and let you find out for yourself. I’ll just say that they're a true gem, and would feel right at home with classic SyFy channel abominations.

(Fun fact: evidently “SyFy” is Polish slang for “syphilis.” That’s not really relevant to the review, but I just learned this and thought I’d share it for educational purposes.)

Little Heaven, at its heart, is a bad parody of Stephen King’s It. I’m actually convinced that, when setting out to write this book, Cutter specifically had it in his mind to write his own version of King’s novel. It’s the only way the book makes sense to me. The thing about Little Heaven is, I feel there’s a really great book somewhere in its 500 pages. If only an editor had thrown it all in a blender before publication and salvaged the substance spattered against the lid, maybe this review would be more positive. If he’d cut out all of the 1980s chapters and just stuck with one, linear story, there might have been a good book here.

But still, that’s not to say the 1960s chapters are perfect, either. Not by any stretch. For one thing, the villain we have here, a psycho preacher named Amos, is basically a knock-off Jim Jones, except Amos lacks all of the charisma required to reach cult-leader status. Not once was I given a reason to believe anybody would ever trust Amos enough to follow him to Little Heaven.

There were times, early on, where I had a lot of fun with Little Heaven, but as I progressed further the realization hit me that I’d already read this story before, in about a dozen Stephen King novels. This thing is basically a mashup of King’s greatest hits, except it’s lacking all the magic that makes King’s work shine.

Wow! Gail here. I do not know how you did it . You wrote a review that had all the good the bad and the ugly and I would still read it because of what  you saw, and the care with which you treated the author.

This is the best review of anything I have ever read. There is regard and respect and truth and the ability to find in the story the beauty of the man's work, and yet not pussy foot around the flaws. I am totally in awe. I will be attempting to be so fresh and real and helpful even as you are with each review/critique I write.I do not know this author, but I would read his stuff just because of how you respected his work. It is a wonderful thing to fully acknowlege what you think about someone elses piece, in the context of who they are to you as a writer. I hope I never forget what you have just taught me. Thanks. gsr

So... better or worse than Odd Thomas?