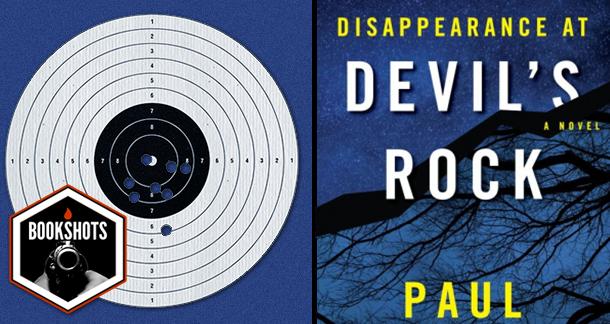 The cosmic horror in this novel sneaks up and quietly caresses you. Once you feel its touch, it’s far too late to escape.

There is a disappearance...at Devil’s Rock.

What We Lost in the Nether

Tommy, the Boy Who Disappeared, and his two best friends, Luis and Josh.

I know it’s impossible now, but the cast of Stand By Me would be perfect here. We need 1986’s Will Wheaton as Tommy, River Phoenix as Luis, and Jerry O’Connell as Josh. Corey Feldman can go fuck himself, though. I have no idea who would play Kate, maybe an eleven year-old Drew Barrymore or Dakota Fanning, and I’m thinking maybe Tilda Swinton for Elizabeth, and yeah, maybe I pick Tilda Swinton for most roles in these Bookshots reviews, but maybe there’s a reason for it.

The small town in Disappearance at Devil’s Rock reminded me so much of the small town I grew up in that I can say I probably have lived there. Maybe not the exact town, but a pretty similar replica. I would live there again, too. I’d sprawl out on Devil’s Rock and get drunk with the boys and discuss zombie contingency plans every damn day.

Everyone knows the devil has your dick.

Disappearance at Devil’s Rock is an extremely slow-burn. It begins with one of the most horrifying scenes every parent fears, with The Call—The Your Child Is Missing Call. We’ve all imagined receiving one ourselves. It’s the ultimate horror. What follows is a very realistic, very depressing series of events as Elizabeth does everything in her power to locate her missing boy.

What at first seems like a straight-forward missing child story soon evolves into something much more sinister, something I can’t imagine will be easy to predict. The first 230 pages or so lead you along a slow-winding road. It’s a road full of sadness, fueled by a mother’s grief, and we’re right there with her, feeling it all, unable to look away, unable to escape. We also witness flashbacks of Tommy and his two friends before the abduction, shooting the shit on Devil’s Rock, getting involved in the type of conversations that’ll inflict this strong desire to go watch Stand By Me all over again. These conversations also include references to Minecraft, but with some highly disturbing implications concerning the "Nether" that I totally dug. Tremblay gives us a good mix of the grieving parent chapters and the Tommy flashbacks. Not once do you feel like anybody outstays their welcome.

Then, around the 230 mark, the book sucker-punches you right in the face. I struggle here, because I want to go on and on about the way this book develops, the sudden turn that I was not expecting, but I know I would have been upset if someone had ruined it for me, so I’ll try my best to avoid anything specific. I’ll just say this: Tremblay is a master of slowly poisoning his readers with horror. You think you know where this book is going but you don’t know shit.  There is a specific reason I compared this book to The Girl Next Door, but I can't tell you. You'll know when you read it.

Like IV drops introduced to your system over a long period of time, you don’t realize you’re high as a kite until the morphine’s long gone. The cosmic horror in this novel sneaks up and quietly caresses you. Once you feel its touch, it’s far too late to escape.