Bookshots: 'Beneath' by Kristi DeMeester 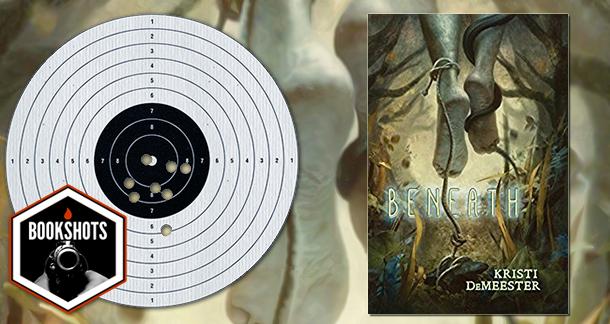 I am a person who is afraid of mostly everything. Two of those fears include religion and snakes. Guess what there is a lot of in Beneath?

Kristi DeMeester, a writer from Atlanta whose short fiction has appeared in notable publications such as Black Static, Apex, and The Dark. She has a short fiction collection coming out soon from Apex Publications titled Everything That’s Underneath, which sounds like an appropriate companion title to the novel currently being reviewed.

Pastor Wayne - Michael Shannon, because he is my husband and should be in every movie.

There were worse sins than getting piss ass drunk before five-o-clock on a Wednesday afternoon in the middle of absolutely nowhere.

If you ever find yourself in a position where your boss is sending you to a small, isolated town to investigate the local townsfolk, I need you to promise me something right now and tell me you will immediately quit that job. Trust me. Nothing good awaits your future otherwise. There’s a pretty good chance you’ll encounter a shady preacher, and an even greater chance you’ll run into some fucked up voodoo snake bullshit. Animals will start dying. Dead animals will start resurrecting. Little kids will start acting super creepy and weird.

Don’t believe me? Pick up a copy of Kristi DeMeester’s debut horror novel, Beneath, and tell me I’m lying. This book here is all the evidence you need. You’ll have a hard time reading anything creepier and more screwed up. If you think that’s a challenge, you’re correct. But don’t you dare try recommending something in the comments until you’ve gone ahead and read DeMeester’s novel, because holy crap, this thing is going to disturb you.

Look, I am a person who is afraid of mostly everything. Two of those fears include religion and snakes. Guess what there is a lot of in Beneath? If you guessed religion and snakes, wow, holy shit, yeah, that’s exactly it. Good guess. I wasn’t always afraid of snakes, but then there was an incident with a rattlesnake...and, well, let’s just say Beneath brought up some bad memories. Fucking snakes. Oh my god. Kill them all. Kill them all and buy this book and read it and enjoy it and enjoy the nightmares. Unless you’re like me and rarely remember your dreams. Then sleep undisturbed, I guess. Whatever you want to do, really.