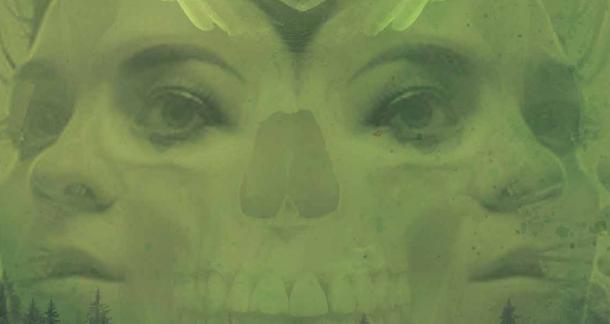 Cancer sucks. You’re not going to find many people willing to argue this point. It’s the illness that touches everybody. No one is immune, not even badass witches—not even Abby Waite, the newscaster protagonist who begins Carrie Laben’s A Hawk in the Woods in a literal waiting room.

Abby already knows what the doctor’s going to say about the curious mole between her shoulders, the one that seems to keep growing with time. She’s used to mentally pushing people around, persuading them to do and say whatever she wants, but the strongest brain mojo in the world isn’t going to prevent this particular disease from rendering her body useless. The cancer’s so far along at this point, the doctor doubts modern medicine will offer much guidance. The only person who can truly help Abby is her twin sister, Martha, but of course Martha’s currently locked up in prison for an unspeakable crime. But that’s no problem; with Abby’s mind persuasion powers and Martha’s ability to fold time, a little prison escape will hardly make them sweat.

Despite A Hawk in the Woods being Carrie Laben’s debut novel, one look at her short story bibliography will demonstrate how long she’s been kicking ass in genre fiction. Most writers don’t manage to snag goddamn Clarkesworld Magazine as their first story sale, yet that’s exactly what Laben managed to pull off back in 2007 with her Shirley Jackson Award-nominated story, “Something in the Mermaid Way.” Other credits include such impressive publications such as Apex, The Dark, and many more. My point being—it shouldn’t be a surprise that A Hawk in the Woods rocked my world. The writing here is strong, folks.

Consider this book the "Geek Love" of witchcraft.

Split between two timelines (Adult Abby and Child Abby), the pacing is laid out on an acrobat’s highwire—one false move and you’re gonna have quite the mess on your hands. Often when I encounter this kind of bouncing back and forth, I find myself invested in only one of the storylines, rushing through “the boring sections” so I can read more about what’s currently exciting. Thankfully, in Laben’s novel, there’s no such thing as “the boring section,” and both storylines are equally intriguing. Consider this book the Geek Love of witchcraft.

The central storyline is essentially one long road trip, which I’m typically a sucker for, anyway. Two characters squished together in a car, encountering weirdos and monsters as they travel across the country, stalked by rogue radio stations and spooky folk songs? Sign me right the hell up. The chemistry between Abby and Martha is so authentic, you’ll want to keep hanging out with these two long after the novel’s climax.

Then you have the storyline that closes out each chapter: Abby and Martha growing up with an abusive grandfather and mother. This is a family of witches, and the whole town suspects something is weird about them. As you might understand, the other school children don’t quite take to the Waite sisters. They’re considered freaks and are treated as such. Thankfully, sisterhood is strong—but is it impenetrable?

A Hawk in the Woods might feature one of the worst mothers I’ve encountered in a novel since Gillian Flynn’s Sharp Objects. I don’t know why I like evil moms so much in my literature, but I’m sure a therapist would have plenty to say about it.

Laben’s a master of multiple styles. She can be weird when the story calls for it or she can be heartwarming—and goddamn she can be hilarious. This is a fun book, make no mistake about it. She possesses the wonderful ability to crack you up one second then punch you into silence the next. This is the best debut novel you'll read all year. I can’t wait to follow the rest of her career.