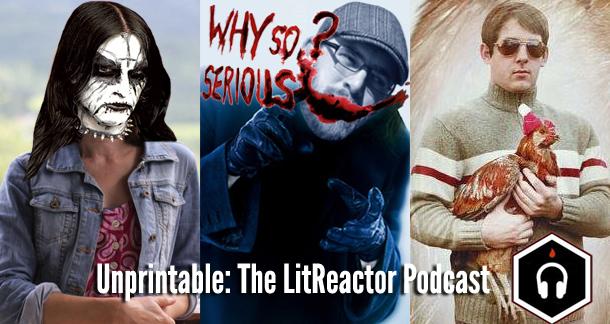 Episode 4 - Should You Write For Free? (Guest: Craig Clevenger)

You read right. Unprintable has scored its very first guest host. You may know him as the velvety author of The Contortionist's Handbook and Dermaphoria; a man who needs no introduction but is getting one anyway because Cath had no idea who he was; your friend and mine, the one... the only... rabbit-sitter extraordinaire... Craig Clevenger!

Craig was kind enough to join us for a virtual jaw session, and even though we promised not to make it all about him, the first thing we did was put the screws to him. Sucker! Eventually we let him off the hot seat and turned our discussion to the news. E.L. James was named the Publishers Weekly person of the year. Say what? And speaking of sexy, we talk about unsexy sex scenes and how not to write them. (Basically, never compare a woman's netherly fragrance to an almond loaf.)

This week in reads: Josh is still talking about Book of the New Sun, but is also rereading the Phineas Poe trilogy by Velvet compatriot Will Christopher Baer. Cath gives up on A Visit From the Goon Squad and moves on to the opium infused Narcopolis. Rob is reading a crazy, Russian sci-fi novel (is there any other kind?) called Roadside Picnic, as well as his own shit. Craig recently finished Danielewski's quotable fable, The Fifty Year Sword, and is chowing down on David Foster Wallace's non-fic collection, Both Flesh and Not.

Eventually we get around to discussing the all important topic of the episode: Should you write for free? Short answer: Maybe. Long answer: You'll have to listen to the podcast. It's complicated.

As always, if you enjoy the episode, please rate us on iTunes, and if you're feeling extra specially generous, write us a short review. The few we've gotten so far have been great. We'll see you for episode 5, for which we have no idea what the topic will be.

Get a Blank ATM CARD And Cash Good Money/Funds Pay Your Debt directly today in any ATM machine around you anywhere in the world. It's 100% guaranteed secure with no worries of being caught because the blank card it's already programmed and loaded with good funds in it depending on your card you purchase, in such a way that it is not traceable, which also have a technique that makes it impossible for the CCTV to detect you, I am not a stupid man that I will come out to the public and start saying what someone have not done. For more info contact Engr. Michael and also on how you are going to get your Card, Order yours today via Email: ( micharelatmhacker@gmail.com )