Podcast by Joshua Chaplinsky February 15, 2022
In: 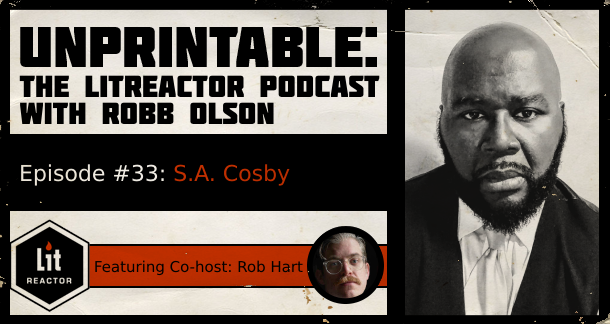 Every episode, Unprintable will take a thoughtful look at books, the publishing industry, reading, writing, and more; featuring your host Robb Olson, as well as the periodic know-it-all geekery of LitReactor Class Director Rob Hart and Managing Editor Joshua Chaplinsky.

If you haven’t heard about S.A. Cosby lately, you’re just not listening. He’s got award nominations, he’s hitting all the lists, and he’s burning up social media with his books Backtop Wasteland and Razorblade Tears.

Rob Hart is LitReactor’s own Head of the Class, and his highly anticipated book The Paradox Hotel is on the cusp of being released (2/22/22 - who could ask for a better release date!?)

What do these two guys have in common? A lot, it seems. Turns out they’re friends going waaay back, so it’s only natural to get them together in front of some microphones and see what happens. What happened was your host, Robb Olson, didn’t have to speak at all for the first half of the episode! But the guys did fine on their own, talking about what inspired their books, some of the challenges they’ve faced, and the successes they’ve experienced. Also, lots of talk about drinking with a fella named Todd Robinson.

Your Hosts This Episode:

Robb Olson was one of the creators and hosts of the podcast Booked., a literary podcast of book reviews and author interviews. He was an editor and publisher of The Booked Anthology. He briefly wrote a horror TV column for This Is Horror, and guested on the This is Horror podcast several times, as well as one time on Unprintable - the LitReactor podcast, for which he is now the permanent host.

Rob Hart is the class director at LitReactor. He also wrote The Warehouse, which sold in more than 20 languages and was optioned for film by Ron Howard. Other titles include the Ash McKenna crime series, and Scott Free with James Patterson. His next novel, The Paradox Hotel, is due from Ballantine. Find more at www.robwhart.com.