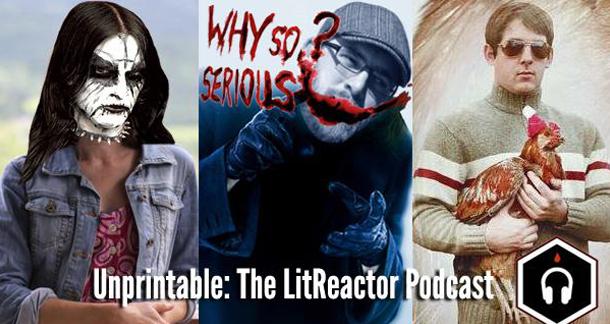 Reads: LitReactor proudly presents a reading of: The Haunted Vagina by Carlton Mellick III, starring Cath as Stacy, the owner of the titular (vagular?) orifice; Rob, as her indifferent boyfriend, Steve; Josh, as your humble narrator, who basically says, "He said, she said" a bunch; and Rose, poor poor Rose, who has to sit through it all.

Topic: What the flark is Bizarro fiction, anyway? We had no idea, so we invited Rose O'keefe, owner/publisher of Eraserhead Press, to elucidate. The whole thing is very elucidatinal.

A quick note: This will be our last episode for a while, as Cath will be in the US, Josh will be in Japan, and Rob will be in Eastern Europe. What a bunch of jet-setters. We'll see you all again sometime in August.

Joshua Chaplinsky is the Managing Editor of LitReactor. He also writes for Twitch and has written for ChuckPalahniuk.net.

I think if the NSA was keeping up with me, I would have been disappeared based on my Twitter alone.