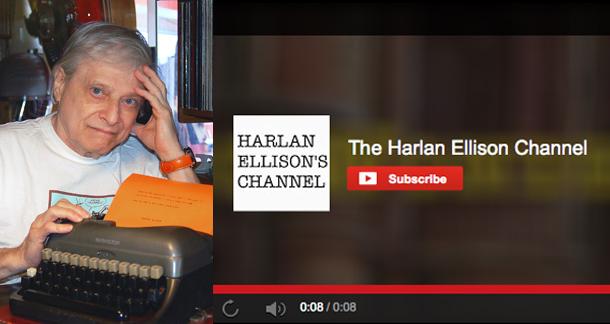 Author Harlan Ellison has been around for a while. He’s written over 1700 scripts, books, short stories, rants online—you name it, he’s probably got the t-shirt. He wrote one of the original Star Trek’s most famous episodes (City on the Edge of Forever) and has won 8 Hugos, 4 Nebulas, 5 Bram Stokers, 2 Edgars… you get the picture. He’s also pissed a lot of people off over the years and is generally perceived as “abrasive”.

Now, the almost-octogenarian has launched a YouTube channel called Ellison Wonderland. Yes, you read that right: Harlan Ellison’s on YouTube. I know, will wonder’s never cease? Here’s the blurb form the channel:

Welcome to Ellison Wonderland, the Harlan Ellison Youtube Channel. This is the home of all things Ellisonian. Lectures, TV appearances, mug shots, film clips, and anything else we or Harlan can think of to throw at you on a regular basis. Some of the stuff here has been floating around the interwebs for a while, but a lot of it will be making its first appearance ever here. And who knows? Harlan himself may provide us with some new material from time to time. Keep checking in to find out!

The intro clip is short (see below) and the page looks like it’s largely a repository for things that have been on the web for some time (you can tell by his hair). But, knowing Ellison, it’s not likely to stay that way for long, now is it?