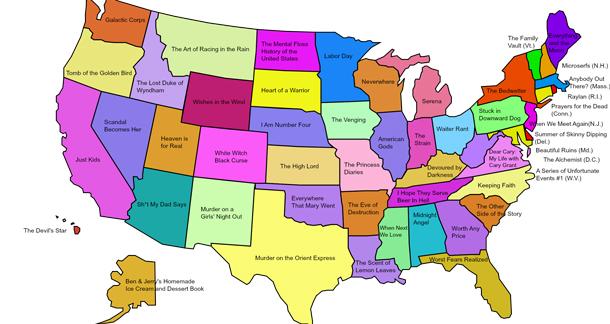 Scribd has released information used to create a map displaying the most popular eBook for each of the 50 United States. Check out the list here.

First things first, readers should know that the list is not a display of the top selling eBooks by state. It's a bit confusing, but using some mathematical wizardry they've figured a relative favorite for each state based on factors other than raw sales. It's bizarre, but the results are more interesting than a map composed entirely of The Hunger Games and Harry Potter.

Secondly, it should be noted that Scribd, a Netflix-style eBook service, does not feature all titles by all authors. When viewing the results, keep in mind that Scribd users may not have the option to select their favorites. Searching a favorite such as Denis Johnson's Jesus' Son will not return the desired result as of this writing. So while the list is interesting, it only displays the relative favorites from the Scribd offerings as opposed to favorite overall titles.

Most importantly, the list is based partially on number of times a book was completed.

Yes, Scribd is keeping track of subscriber reading habits, including whether or not certain titles are finished, genres in which readers tend to finish books, and how quickly readers finish certain book types. Amazon and Barnes & Noble have not shared this type of data with the public, but it's assumed that they are keeping track as well.

Scribd claims this data will help people publish more successful books.  If publishers and authors know what readers want, what they're likely to finish, then they can tailor their works to the wishes of the public.

Regardless of the data's use for authors, there are worse ways to pick a state if you're considering relocating. One could certainly do worse than Illinois and its affinity for Neil Gaiman's American Gods.  It's hard to argue with Michigan's love for Ron Rash's Serena. If you're headed to Memphis, just be aware of Tennessee's endorsement of I Hope They Serve Beer In Hell by Tucker Max.

The bigger question goes out to you. Does the data about what readers do with their eBooks help authors write better books?  Does it help publishers make better selections?  Would it be a good thing for an indie bookstore when making purchases?  Comment below.  Let us know what you think.

Dwayne from Cincinnati, Ohio (suburbs) is reading books that rotate to often to keep this updated March 13, 2014 - 5:17pm

Am I the only who never head of the book for their state?

Community Manager
helpfulsnowman from Colorado is reading But What If We're Wrong? by Chuck Klosterman March 13, 2014 - 6:29pm

I'm right with you on that one.

Joshua Chaplinsky from New York is reading a lot more during the quarantine March 14, 2014 - 6:14am

Dwayne from Cincinnati, Ohio (suburbs) is reading books that rotate to often to keep this updated March 14, 2014 - 5:19pm

@Josh - He is from here in Lexington, still comes back for book signing and the movie and what not.