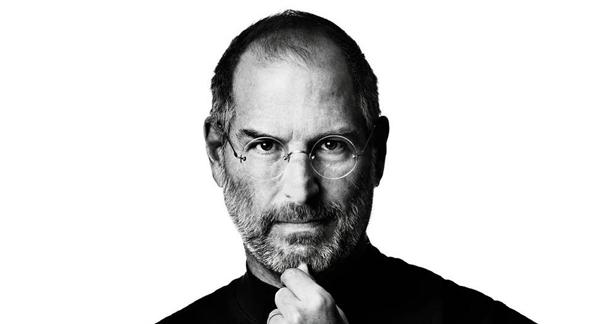 On Wednesday the world lost a great visionary.  Steve Jobs succumbed to his seven year long battle with pancreatic cancer and passed away, surrounded by loved ones, in his home.  Like celebrity deaths sometimes do, this one bothered me.  Yes, it's sad that anyone would die at the age of 56.  But it's somehow sadder when the person that passes is such a freight train of ingenuity; a person with so much to live for and so much yet to accomplish and create.  Whether he was revolutionizing the way animated films could be made with Pixar and the CGI success of Toy Story in 1995, or returning to Apple a year later through the purchase of his company NeXT and helping to turn that brand (Apple) into the force it is today, Steve Jobs changed our world.  I'm typing this to you on a MacBook Pro right now.  I've got my iPhone 4 beside me, resting on top of my iPad 3 (yeah, I know a guy).

In his wake, we once again realize that death leaves a void and in an attempt to fill that void people try to make a connection with the person who passed.  Mac fans have been building shrines outside the 5th Avenue Apple Store in Manhattan since Wednesday.  What started as flowers soon developed into actual Macintosh apples being left.  TMZ reports that the mock black turtlenecks that Steve made famous in his big Apple stage presentations have more than doubled in sales.  And on the eve of this tragedy, Apple announced the iPhone 4s, which was met with mostly lukewarm reaction from fans.  Will this new iPhone prove a bust?  Or will it once again blow the competition away and spike all projected revenue charts?  (Probably the latter, being as how three people in my Instant Message window right now already pre-ordered theirs.) 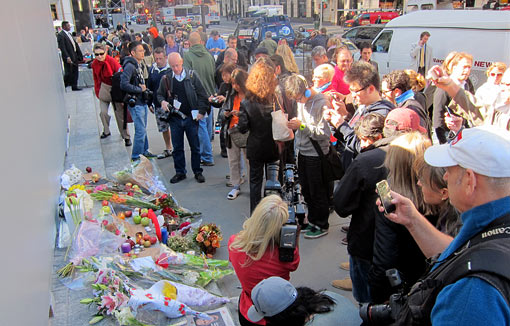 What we do know is that death will once again probably cause a bestseller.  And nobody knows this better than publishers Simon & Schuster, who pushed the release date of their Steve Jobs biography up from late November to October 24th.  Already the book tops the Amazon.com charts for pre-orders.

Here's what Amazon says about the bio, which was penned by Walter Isaacson:

Based on more than forty interviews with Jobs conducted over two years—as well as interviews with more than a hundred family members, friends, adversaries, competitors, and colleagues—Walter Isaacson has written a riveting story of the roller-coaster life and searingly intense personality of a creative entrepreneur whose passion for perfection and ferocious drive revolutionized six industries: personal computers, animated movies, music, phones, tablet computing, and digital publishing.

In his own words, Steve said of the book: "I wanted my kids to know me."

Watch Steve talk about life and death and give cardinal advice in his now landmark commencement speech for Standford University's graduating class of 2005.

I wore white Thursday when I heard about this. We're a Mac family, and in much the same way that many SoCal families do those silly sticker representations of their crew, we have two large and one small white Apple sticker on my wife's Scion to represent our tribe.

Jobs was our Eddison and I'm happy to say my life was touched for so many years by his ideas. Truly an inspiration. What else can you even say?

SoulBoulder from Chicago is reading The Spiritual Anatomy of Emotions October 10, 2011 - 10:37am

I'm not against Steve Jobs, I'm not against Mac, but this fanaticism over a product-head boggles me. I know people who are emotionally devestated by this. And I'm trying to sincerly understand it by replacing Jobs with someone I look to as a strong role-model or cultural purveyor, like a Howard Zinn or Carl Sagan, but still, I cannot grasp the emotional connection to someone who I've never met.

Albiet being inspired or influenced by a change of worldview by an individual through his company's products, I'm afraid this sense of icon fanaticism only drapes the real problems of this world and the more significant issues we should be recognizing, like, mental diseases among the majority, or familial disentegration, or the millions of homeless who can't have a good amount of skin on thier bones that we walk by everyday, almost unrecognizably.

I'm not a disgruntled PC user, (I'm typing this on my I-pad), but in the end, these are all just gadgets. I would gladly trade in my I-stuff for a little more recognition to some of the real problems. This is not an attack on Jobs or Mac, but a call of a little more awareness before everyone starts mindlessly wearing black turtlenecks.