Yep, You Can Send Your Kids To A Hunger Games-Themed Summer Camp 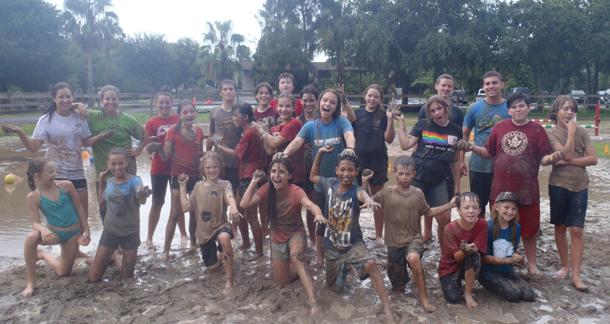 NBC News writer Randee Dawn reports that the Country Day School summer camp in Largo, Florida now hosts a special Hunger Games-inspired tournament, in which "26 young participants are expected to fight one another to the 'death.'" They don't call it "death" or "killing," mind you, but rather "taking lives," which is accomplished by "pulling flags belts from their enemies' waists." The kid with the most flags ("lives") at the end wins the tournament—hey, just like the books!

Many people aren't too thrilled about this. The Tampa Bay Times wrote a scathing piece about the camp, accusing the tournament of glamorizing violence. More from NBC's Dawn:

The story quoted clinical psychologist Susan Toler as saying the camp idea was 'unthinkable,' noting that 'when (children) start thinking and owning and adopting and assuming (those killer) roles, it becomes close to them. The violence becomes less egregious.'

They even allege a child was physically harmed in the play-acting. Country Day School fought back in their blog, denying their tournament focused solely on violence:

As a school, we believe (the Times) editors chose to eliminate all of the wonderful coverage of the camp and then elected to lead the reader to believe that the focus was on violence. This misrepresentation and the suggestion that a child was hurt while in our care could not be further from the truth. Country Day School always prioritizes the emotional and physical safety of our students. As we purposefully promote peace and kindness with all of our students, it is unthinkable that Country Day School would ever support or encourage violence.

Country Day School does support the Times video of their camp, which they say "provides an accurate overview" of the tournament. Check it out here.

Honestly, I don't see the big deal here. I mean, kids are going to act out The Hunger Games and any other violent media they see—it's what kids do. They also play freakin' Grand Theft Auto. So long as they understand the difference between pretend death and real death, I think they're going to be fine. What do you think?

Meh, depends on the kid. Sometimes the lessons of the book go over people's heads.

bohemianonrye from Pittsburgh, PA is reading Love in the Time of Global Warming August 16, 2013 - 2:19pm

So... LARP camp? How is this different from any other LARP game?

David Buglass from Saskatoon SK is reading The Psychopath Test: A Journey Through the Madness Industry August 16, 2013 - 9:47pm

It's just an eloborate game of flags. I don't see the big deal.

Mess_Jess from Sydney, Australia, living in Toronto, Canada is reading Perfect by Rachael Joyce August 18, 2013 - 10:55am

@bohemian -- that was my exact thought too! Hehe.