YA Fiction Increasingly Targeted by the Book Censors 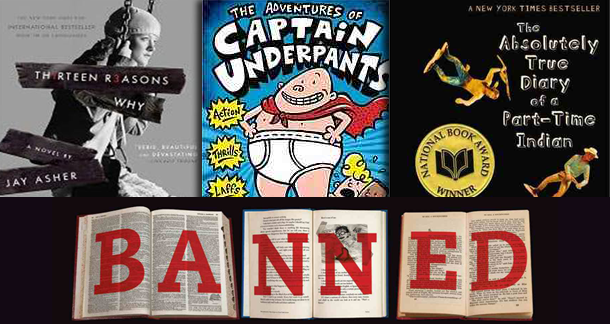 It’s Banned Books Week again and, depressingly, there’s still people trying to stop us from reading whatever we want to. However, the American Library Association (ALA) has revealed the area of literature that is increasingly being targeted is the young adult market, a trend which is “driven by the desire to protect teenagers from tales of sex, drugs and suicide in young adult fiction”.

"Young adult is a big trend right now, and a high number of complaints are directed at those books," said Barbara Stripling, president of the American Library Association, which organizes Banned Books Week. "There is a lot of pressure to keep teenagers safe and protected, especially in urban areas, and we are seeing many more complaints about alcohol, smoking, suicide and sexually explicit material."

And it’s not the only one. Thirteen Reasons Why, by Jay Asher is about “the aftermath of a teen suicide”. The book got to No. 1 on the New York Times bestseller list — and made the top 10 banned books list in 2012.

"Teenagers tell us that they like to read about what's going on," Stripling said. "They say 'what do they [adults] think we are?', as if teenagers remain naive and uneducated when facing these issues every day. The best way to protect them is to give them an array of things to read. If they are over-sheltered, they will enter the world without coping skills."

It seems to come down to the usual argument: if they read about it, they’ll want to have sex/kill themselves/do drugs/drive a car real fast/just live. I’d also argue that the book banners are incapable or unwilling to allow others to make their own decisions about a particular topic. Isn’t that just another form of mind control?

Sometimes It think the only books safe from being banned are the ones that give detailed instructions on burying your head in sand.

Teenagers are a BLINK away from being adults. A BLINK away from being on their own and dealing with the world without parents and teachers corralling them, telling them what to do and how to do it. We really need to be realistic about where they are in life-- and ignorning things that teens REALLY go through (like alcoholism in the family, or even sexual arousal) isn't a way to set them up for success. Teenagers don't know everything, but we should probably let them try to learn (and admit that we don't know everything, either).

Dino Parenti from Los Angeles is reading Everything He Gets His Hands On September 24, 2013 - 12:11pm

You'd think YA would be the one place where the truths of life would be actively advocated, not smothered. Too many teens don't always have parents or guardians willing/able to discuss real-life elements of sexuality, alcoholism, depression, suicide, bullying, etc., and fiction allows them a safe way to face these issues and hopefully inspire questions and empathy during a very sticky time of life. I wish I'd read more of this at that age.

Dwayne from Cincinnati, Ohio (suburbs) is reading books that rotate to often to keep this updated September 25, 2013 - 8:39am

Banning books on poorly thought out logic is good for kids. If we let them make informed choices with as much information as pragmatic they will never be ready for the high stakes game of pin the tail on the donkey that is adulthood.