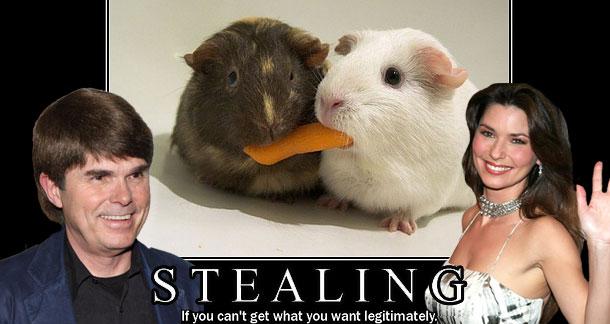 Via Brian Keene and B-Thoughtful

Writers beware! Your shit is being ganked. Whether you are a big-time author, an unpubbed hopeful, or Shania Twain- some dude named David Boyer is ripping you off.

Apparently he's been doing it for years. Numerous cease and desist letters have been issued, but have resulted in neither ceasing nor desisting. He will give the illusion of compliance by taking the offending piece down from the web, before promptly putting it back up under yet another alias. He is also defrauding those who purchase his services and wares, by selling copyrighted material.

Boyer subsists below the poverty line, so any attempt at monetary recompense would be a fool's errand, but someone has finally figured out a way to make his ass figuratively pay- criminal charges. If convicted, he could serve time in jail, wherein his ass will literally pay. If you or someone you love have been a victim of Boyer's thievery, please contribute to the consumer fraud case with the Indiana Attorney General’s Office:

1. Please write a letter or email to:

3. Be respectful. No cursing. State that you are a concerned consumer or author and that you wish to bring notice of Consumer Fraud on the part of David Boyer, a resident of Vincennes, Indiana, to their attention. Mr. Boyer is stealing copyrighted material and selling it as his own. Many customers who have ordered said material online have never received it, nor a refund. Ones who do receive it are, in fact, getting fraudulent merchandise.

4. Most importantly, as Rick notes in his plea, make sure you say that you want David Boyer pursued under Consumer Fraud regulations at the state’s cost. He’s defrauding consumers.

Check out B Thoughtful's blog for the full list of victims, the latest being a 16 year old girl. Whereas someone like Eddie Vedder only sounds like he is stealing material from teenage girls, David Boyer is actually doing it. Hence Keene colorfully likening him to a "bag full of coitus."

im sure i can find a pitchfork, being in Tennessee??haha

Just don't burn the work, return it to it's rightful owner.
I can only imagine how it must feel to have somebody steal your work.

I'm pretty sure he solicited me for a story for his online horror magazine years ago but I told him that I didn't write horror.

Please familarize yourself with David Boyer and all his aliases.