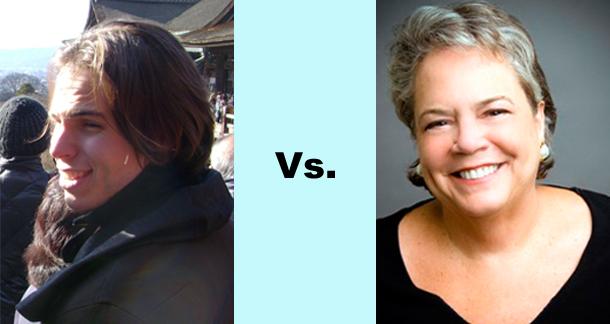 Sebastian Marshall will be remembered as one of two things- a literary hero who stood up to "the man," or that guy who ran his mouth and torpedoed his career. Either way, we should see how this plays out for him over the next couple of days.

Marshall, who made a deal with Simon & Schuster for a single non-fiction book, just posted a lengthy diatribe to his blog, calling out the publisher's CEO, Carolyn Reidy. He says that, after signing a contract in December 2010, S&S proceeded to treat him like a "bitch."

Marshall, a self-described "strategist, entrepreneur, technologist, avid reader and writer, casual historian [and] cowboy scientist," doesn't just call out Reidy. He also names his editor and agent, among others at Simon & Schuster, though he views them as mostly harmless (and even apologies for naming them).

You can read the entire blog post at this link, and it's worth a look, because it's a very rare insight into the monstrous clusterfuck that some of us refer to as the "publishing industry." A lot of these things have been said before, about late payments, a lack of communication, and the maddening, drawn-out nature of the process. But this is probably the first time a writer has put names, numbers, and dates to it.

Essentially, Marshall is saying what a lot of people are already thinking. Now we just have to wait and see what price he'll have to pay for saying it.

I read the blog. Yikes. Maybe if more authors did this, their industry "partners" wouldn't so frequently foul stuff up, accountability and all that.

pure awesome - I love it - and am curious as to how S&S will react - particularly if they have one of those "non-disclosure" clauses...

Lorraine Devon Wilke from LA (by way of Chicago) is reading The Night Porter by Mark Barry November 17, 2011 - 3:06pm

Wow. I feel like I just read a manifesto of unvarnished, unfiltered, probably spot-on industrial critique. Oh, but for it to have the desired effect….!

Was this wise? Politic? Was this just the ranting of a bipolar man on a self-destructive tear (as one of the commenters implies)? I dunno. All I know is, it sounds to me like it’s tellin’ it like it is in an industry that clearly and desperately needs some serious, ground-up, completely holistic innovation.

I have no idea if anyone at S&S, particularly Carolyn Reidy, will be able to get past the tsunami gut-punch of his unbridled candor, to ferret out and act upon any of the brutal truths included in his diatribe, but it would be to their benefit, and their artists, if they did. As a person whose teeth grind far too often in the attempts to crack the code, make headway, incite response, elicit feedback or just garner a modicum of respect in an industry that seems hellbent on staying afloat by barring the castle from so many, and – apparently – even mishandling the care and feeding of the ones they actually do let in, it seems the time has come to put aside careful, PC communication and fiercely and frankly demand change in the weary, counterproductive paradigms that have outworn their welcome.

Actually, I got a vicarious thrill reading this rant; it’s easy to sit out here and commiserate with other artists/writers/thinkers/etc. still pushing to be let in the door and up on the stage, but such a clear, detailed, humble and most likely accurate assessment of how the industry and its players work from someone who’s actually IN and has something significant to lose…well, that takes guts. I won't categorize any of this as “mental illness,” as I’m not clear whether or not he's stating that as fact or just describing the mercurial and hyperbolic nature of the most vibrant of artists, but either way, his manifesto was mindblowingly admirable in my book. I hope he survives the imminent blowback and, mostly, I hope the parties to which this was directed – most of whom are probably good people who have simply lost a clear sense of what is and isn’t working – shake off their knee-jerk outrage, get honest with themselves and their industry, and make the changes that are clearly needed. For everyone’s sake.

Joshua Chaplinsky from New York is reading a lot more during the quarantine November 17, 2011 - 3:20pm

Hope it works out for the fella. Will be interesting to see. This is one of the reasons I didn't go down the agent route. I am a useless and lazy fuck. I surf a lot. My Publisher, Cutting Edge Press were made very aware of this. And the Agent that was to be, who was trying to suckle on my profit teet, and amp up the workload for extra % got told to "Fuck right off." I guess this is symtomatic of non fiction where other parties need to be factored in (photographers etc).

But if you are lucky enough to get a deal, don't say "Yes" to everything. Layout your timescales. I got my advance, and went to Vegas and blew it. I live in England too. I got arrested for pretending to shoot a transvestite hooker while there, and as such missed my flight. So missed a big 'This is our new author' meeting. I turned up for another in a 'I Heart Vagina' T-shirt. It's all on the blog. I'm not trying to be a twat, just, well there has been some speed bumps. But I picked a publisher that understands my ways, rather than a mainstream. I went off to France for a surf when the last edit was due in (I'd forgotten). You have to manage yours and your publishers expectations.

Form a relationship with folk you trust, not a chain of 10%'ers. Josh at my publisher is a legend. Just lets me go, mops up after me, and points out who's got there figer up my ass.

From reading his previous blog post as well as the one linked above, I already don't like this guy.  I can see his point, and yes, it's true, he was treated in an appalling manner, but throwing a tantrum isn't going to get you what you want.  I'm sorry, but no-one likes whiny little bitches, and that's exactly how he comes across to me.  Seriously, read his previous blog post and note the hypocrisy.  Note the bragging.  He sounds like a fucking wanker to me - certainly no-one I'd like to spend any time with.  And so I wonder: is he really a saint in the business world, or does he always act like a petchulant child?  Like I said, I can see his point, and there's nothing wrong with posting an email about it - but being a smartarse isn't going to do him any favours.  For someone who is apparently so successful in the business world, he hasn't handled this well.  He seems to be totally unaware of one of the fundamental rules of business success: maintain your composure while those around you lose their heads.  Sure, I can understand that it might have just gotten too much for him (we've all reached a point where we feel like we've been taking shit from everyone for too long and we snap; that's human) - but once he finished typing, it was all out of his system; maybe he should have taken the advice from the email in his previous blog post and let it sink in for 10-20 minutes, before clicking send?

The old saying of "nice guys always finish last" certainly has some merit - if you let people (or in this case, corporations) walk all over you.  But he has a likeability factor of zero as far as I'm concerned, so while I do think that it sucks what happened to him, I have no sympathy for him at the same time.

I read about half.  This guy really needs an editor.

I'll go along with that.

His actions seem a pretty unprofessional way to go about it, to me. Let alone his actual writing of it, very immature.

But I've blown up, broke stuff, and told employers to shove it over disputes for much (MUCH) less money, so I don't blame him.

If someone is giving me a 65k check, I'm kissing their feet then shutting my mouth.