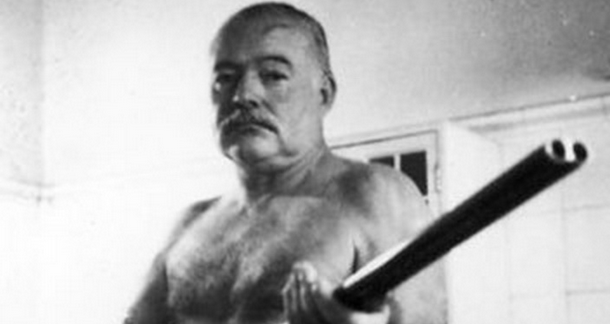 Ernest Hemingway's stripped down, terse style of writing formed an important cornerstone of modern literature. A new web-based app, rather appropriately called Hemingway, seeks to impart a little bit of Hemingway's style onto your own work.

Hemingway analyzes your text and points out flawed passages, highlighting egregious errors like overuse of adverbs, passive voice, or overcomplicated phrases (the app suggests using simply 'to' instead of 'in order to' in one case). The app goes deeper than that, though, and looks for sentences whose structures are hard to follow, dividing them into "hard to read" or "very hard to read".

After analysis, the app gives your text a readability score, showing you how Hemingway-like your text is. The lower the number, the better.

But what good is this app without some case studies?

One of Hemingway's most iconic stories scored well with the app, but it appears that ol' Ernest had a bit of an adverb problem, with 59 of them in the 9,000 words of the story. According to the app, Hemingway also had an issue with some meandering sentences that went on way longer than they should have.

Holy Yog-Sothoth, nobody tell Lovecraft about the poor score he received in the app for his seminal tale of cosmic horror, I'm not sure if the man's fragile psyche could handle it. Hemingway pointed out 198 adverbs in the 11,000 word text, and 163 sentences were classified as "very hard to read".

Compared to Carver, Hemingway's prose seems positively florid. The app had very few bad things to say about Carver's 6,000 word story, counting just 6 adverbs in the text with only 3 out of 725 sentences being hard to read.

Well, you know what they say, there's no accounting for taste. Hemingway doesn't find much wrong with the 4,500 word first chapter of the Twilight fan-fiction-cum-BDSM novel (I'm so very sorry for that pun). James is a little heavy on the adverbs according to the app, but with only 20 of the 504 sentences being hard to read, I'm sure Hemingway himself would have had only praise for the work.

Obviously, the app isn't perfect, but it can give you some insight on your writing style and maybe curtail some bad habits you've developed in your prose. Go ahead, give it a shot (sorry about that pun as well).

I feel like I would start yelling at the app "What the hell do YOU know Hemmingway? YOU DON'T KNOW ME!" *flings phone*

Joshua Chaplinsky from New York is reading a lot more during the quarantine February 19, 2014 - 10:49am

At the least this app is good for checking if you're writing in the passive voice.

This is awesome.  I'm not necessarily that big of a Hemingway fan, but it can prove pretty useful when self-editing prior to handing it off to a first-reader.

EDIT: I've put a few things of mine in, and a few things from other writers, and it seems like it's pretty easy to get a "Good" score.  Obviously the app doesn't take into account if the writing is good beyond basic technique/comprehension (compared to Hemingway, at any rate).  But now I can't imagine what kind of writing would get a "Bad" score.  Still, I find value in it: finding passive voice and adverbs aside, the thing I really like is the labelling of hard to read sentences.  I don't think I'm the only one that will write something at times that makes total sense to me, but confuses somebody else who reads it.  Always nice to know potential weakspots and be able to better determine if a sentence is hard to read because it's nonsensical and bad vs. complex but still good.

I have yet to put anything in that is above a nine. Maybe a list of adverbs would set it off.