Would You Like a Side of Profanity With Your Literature? 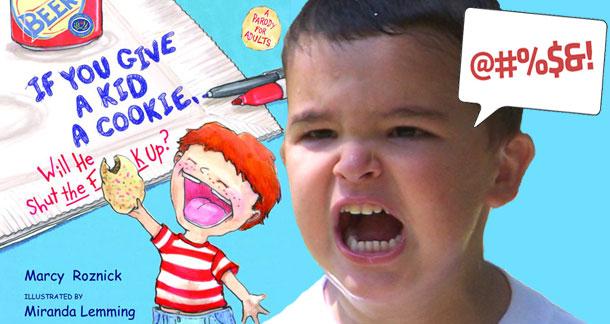 So I'm pitching my agent on a new book called Pray Good, Fuck Great, which is actually part of a new genre I've invented called Christian Erotica.  Essentially, what this book will do is provide sexual instruction (positions, role-playing, experimentation, etc.) and teach the reader how to embrace these things while remaining true to their faith.  Think of it as the happy medium between the Bible and The Kama Sutra.  Whether you've been married fifty days or fifty years, Pray Good, Fuck Great is the sexual and spiritual enlightenment that no couple should be without.

This is the part where various editors lean back in their chair, thoughtfully scratching their chin and say, "Eh, I'm not really sure about that title.  Can we clean it up?"

No, you cannot "clean it up."  Don't you know that potty talk is all the rage in book titles?

Shit My Dad Says peaked at #9 on USA Today's bestseller's list.  Do you think it would have done as well if it was called Stuff My Dad Says? Hell no!

Go The Fuck to Sleep topped out at #6 (Thanks, Sam Jackson!)

And now we've got If You Give a Kid a Cookie, Will He Shut the Fuck Up?

Marc Resnick, who served as editor of the book, said, "Whether they verbalize it or not, every parent has that moment when they want the kid to shut the fuck up."

Yeah, I get it. "Cleaning it up," as it were, would subtract from the authenticity of the sentiment, but that's just another way of saying, "Our previously grabbing title will cease to be as grabbing."

On a completely serious note, our favorite four-letter words are commonplace in film, TV, and radio.  Some of them flirt with it, i.e. Meet the Fockers.  Some celebrate it; see the infamous "shit" episode of South Park.  Literature seemed to be that one corner of the room we hadn't yet defecated in, but it's steadily changing one "shit" and "fuck" at a time.  True, there's a certain novelty to seeing a curse word on a book, and that's mostly because we, the book-buying public--we're not expecting it.  There's a quirkiness about it.  Or shock.  And it makes me wonder if we're crossing yet another hash mark to the not-so-green pastures of an Idiocracy-type society.  Are we choosing to be more crude for the attention of potential consumers, or is this the natural progression of things?

People wrote books and movies, movies that had stories so you cared whose ass it was and why it was farting, and I believe that time can come again!

Pray Good, Fuck Great shall be recalled from the various slush piles of New York publishing houses.  It would only contribute to an ever-increasing fad and is a prime example of ill-applied literary ethics.  It's also completely fabricated.  I'm pretty sure my agent would dump me if I ever seriously tried to pitch something like this.

Sound off in the comments section about curses in titles: Is it a fad? Funny? Or is it dumbing down the industry?

Yeah, sorry about that. Couldn't resist.

It's dumb. It is a novelty, and not much of an inspired one at that. I think a quick look at Snooki's book sales numbers will convince most publishers that going after the dumb market is not too smart. I give it a half-life of three months.

I was curious for a moment about whether Christians would buy a book with the word "fuck" in the title. I'm a big fan of free speech, so... if the title makes sense, I would go for it.

As far as profanity in books is concerned.... as long as it makes sense, it's cool. I don't like it when it's there for the sake of.... being there. In every sentence. Some things you can only say a certain way by using such words. Just like any other words, they have a very specific usage. Used correctly, they can be powerful. Overused, well... they seem flat and sound stupid.

The script for the movie that became "Friends With Benefits" was originally titled "Fuck Buddies."

This is a classic debate and I can see both sides of it. Personally, I find the "kid's books" hilarious. This is actually the second time I've seen Go the F**k to Sleep. It was on this pretty unique site I found last week. Thisiswhyimbroke.com which is so entertaining when you're broke already and bored in history class.

A dilemma, indeed.  I don't know how you could possibly even clean the title up without losing the message.  "Pray Good, Fornicate With Great Abandon"?

I think it's cool. Also, it's 'peaked' not 'peeked'. Unless the books were sneaking a look at the bestsellers list, which is just silly.

Joshua Chaplinsky from New York is reading a lot more during the quarantine October 28, 2011 - 8:00am

To be fair, I don't know if I would consider any of these examples "literature." I have seen actual novels that contained profanity in the title, such as The Fuck-up, but those were slightly less gimmicky.

Tim from Philadelphia is reading approximately eight different books. Most unsuccessfully. October 28, 2011 - 8:17am

Since we are talking about titles of books here and not the content of books I think you've got to look at what people expect from a title. I can't speak for anyone else (but I have the feeling many feel the same way) I expect a title to give me an overall feeling of what to expect from the story, especially if it is not by an author known for a specific genre. And so I might not judge a book by its cover but I will judge it by its title. And if it contains profanity, which almost by definition, is ham-fisted and unsubtle, I'm going to have the feeling that the book itself is the same unless the title is very creative and rises above its foundational flaws. So I would say a serious writer would be wise to stay away from profanity in the title unless that is exactly what the book is about and that is the message you want to send. For example, the title Monica mentions above, although I don't consider "slutty" to be profanity, gives you a pretty good idea of what the general feel of what the book is about or at least enough to make you want to read the blurb or scan the first page if you are interested in something a little 'saucy".

That said, the parody books, like all parody books are a novelty item. And, for me, if you've read the title, you've read the book so there is no reason to buy it. In fact I'm amazed that people do buy it. I mean, how much more can you expound on the general idea communicated by the title before it turns into an exercise in MadLibs using swear words?

well tim, I don't think i've heard so much judgment, stereotyping and prejudice in one post since i last read the racist comments under random youtube videos of people singing terribly! goodness!

You better be shelling out some quality INTERESTING and compelling material to have such big judgments mister. :)

I'll be checking to make sure.

Monica, may I get you a dictionary. And maybe the phone number of TechCrew so they can come over and fix your shift key?

If by judgment you mean 'the ability to judge, make a decision, or form an opinion objectively, authoritatively, and wisely, especially in matters affecting action; good sense;' then I thank you for the compliment. I am however having trouble following your "stereotyping" and "prejudice" lines of reasoning so if you could elaborate and educate me as to your points of logic I would consider it a dear favor.

Joshua Chaplinsky from New York is reading a lot more during the quarantine October 28, 2011 - 1:03pm

I gotta say, I agree with the ole Tim-meister on this one. Sure he was stating his opinion and being critical, but calling his line of reasoning prejudicial? Are you referring to this bit?

Because correct me if I'm wrong, but I believe he was paying you a compliment.