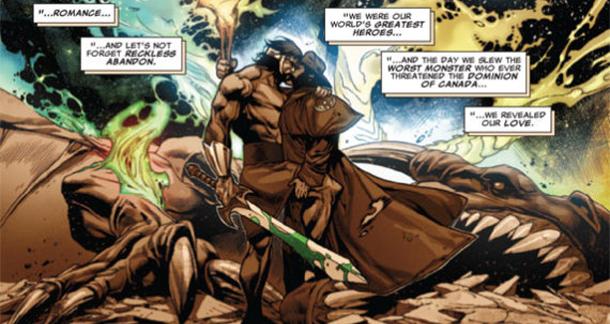 In a move sure to garner both praise and ire from comic book fans, Marvel unveiled a secret relationship between two prominent male characters, albeit indirectly. The Huffington Post reports that in issue 10 of X-Treme X-Men, parallel-dimension versions of Wolverine and Hercules share an intimate kiss and reveal their love for each other to the world. Again, these aren't the "official" characters from other Marvel series, but equivalents from a polyamorous alternate universe, which means the writers are more or less free to pair up whichever characters they choose without "tainting" the real McCoys we all know, love, and think we own.

Marvel has won numerous accolades for their LGBT-friendly content, including a GLAAD Media Awards nomination for Northstar's marriage to his boyfriend in Astonishing X-Men No.51. This is the first time, to my knowledge anyway, that homosexuality has been explored with a major figure like Wolverine, even if it's technically not Wolverine. This could pave the way for more prominent heroes to officially come out of the closet, or lead to new homosexual characters in starring roles.

While most likely not planned as such, this move definitely puts Marvel in a better position than DC, currently under fire for hiring outspoken anti-gay activist Orson Scott Card to pen a few Superman issues.

What does everyone think? Does this fit the alternate Wolverine and Hercules? Could Marvel have picked better mates? Any other super dudes you'd like to see hookup?

Instead of having actual sincere gay characters, Marvel's just been big on adopting that "slash fanfic", as long as it doesn't mess with the canon.

What Renfield said, even if inside my mind I went "teehee I saw a fic like that once..."

Dwayne from Cincinnati, Ohio (suburbs) is reading books that rotate to often to keep this updated March 4, 2013 - 8:25pm

Seems like they are just trying to get attention, these guys being gay doesn't really cause any major changes to them except they randomly make out with each other instead of women. A version of someone who it created some change/conflict with might be a major change: someone with whose female romantic partners played a large part in their life like Spider-Man or Ant-Man. Or maybe someone who felt conflicted or persecuted for being gay back in the day like Captain America.